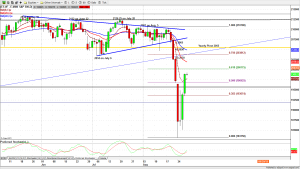 ES had a continuation bounce movement yesterday; it did exactly what we expected. ES went up into the 1985-2000 zone and closed at 1989.25 level.

First, this bounce results from two option expiration days (today and next Monday). Second, people largely expect the Fed will not hike interest rates in September, and that encouraged the shorts to cover. Both helped ES to recover 60% of its loss.

Today we may see a small pullback in the early morning session and a rally back up later in the session. Until the short-term indicators approach overbought territory, we should see ES to do one more down move again.

1960-1948 will be today’s key zone. As long as ES stays above it, odds favor the upside. But if ES closes below it today, it will bring bearish sentiment back into the market again.

Based on yesterday’s price move, 1831 should be first wave low. Depending on news flow, we may see a second wave move down. How low ES can go will depend which high level the ES makes next week.

Economic heavyweights are meeting at Jackson Hole Wyoming this weekend, and recently those annual meetings have produced major policy changes. That knife cuts both ways: we could see a new QE; or we could see renewed promises of interest rate hikes. Either or both will move the markets dramatically.