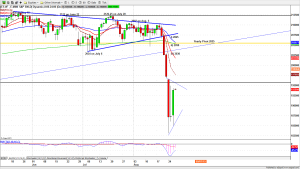 Another volatile day for our traders. The market rallied overnight, and gapped up at the open. After the ES failed to fill the gap at 1873.50, the price started to climb after the President of the New York Fed, William Dudley, suggested a rate increase in September is now unlikely. That observation, combined with upbeat economic data, encouraged buyers.

So far ES is still trading below the monthly range breakdown levels (1947.50-1942.25 zone). Today the GDP report will be released in the pre-market session. Yesterday’s bounce could anticipate a good report.

Download the full trading plan for Thursday with the buy/sell numbers here: 150827-plan

However the short-term indicators are still oversold, and a further bounce should still be expected if the 1895-85 zone continues holding up.

Yesterday we talked about a selling signal, which failed to give a confirmation again. The 50sma line kissed the 200ema line on Tuesday, but separated again yesterday. This non-confirmation could bring more shorts in to cover, which could move the price back up to 1985-2000 for option expirations on Friday and Monday.

One more thought: the current decline with heavy volume is similar to last October’s movement. At that time the ES took seven weeks to complete its correction. This week is the seventh week from the top at 2134 made by the ES in May. We need to keep in mind the possibility that 1831, reached on Monday, is the low for this correction.