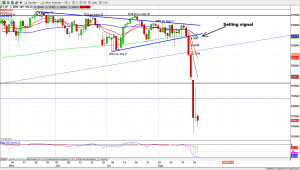 After a strong bounce in the overnight trading, the ES found resistance around Monday’s high area. But the rally failed later in the day and at the end the ES sold off badly again.

The selling pressure came in the afternoon after the ES failed to move back up near the morning session high. On the daily chart, the 50-day moving average line touches the 200 day moving average, but has not crossed over yet. This could have persuaded the buyers to give up and sell at the closing.

ES just did its back fill job and tried to test 1831, Monday’s low area. Today 1850 is a key line, largely bought by option Put players. This line could become a choppy area and the price could swing around it.

The trend is clearly on the downside, and any bounce will not last very long. This is the last trading week of August, and later today we may see shorts covering and pushing the price back up for window dressing for the end of the month. Again the bounce shouldn’t last long, unless the Fed announces a new QE. Early in the morning we should watch for a low to be formed first and a rally back up later.