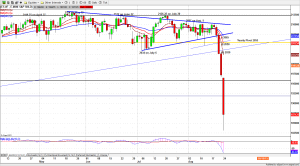 The ES opened the overnight session Sunday night about 4 points lower than Friday’s close. Then the waterfall began.

After the Asian session opened badly the ES dropped 50 points lower to 1911 before the price found some temporary stability. Then the European markets opened, also badly, and the selling resumed. The ES dropped 5% and traded at 1870.

When the regular trading session opened, panic sellers pushed the ES down another 40 points to 1831 before finding support. It then bounced 120 points until noon. Then it dived again, gave back most of the bounce, and closed near the regular session open.

It was a big100 point swing on extremely heavy volume: good for traders, bad for investors, including many who are still holding long positions. The bounce was brief; bounces will not last very long in this kind of bearish environment.

Now ES has given final confirmation that the correction has started, and not only in short- and intermediate-term. Today’s declining also did lots of damage to the long-term. Now 2055 becomes a major resistance line. Any bounce that does not break through it will be sold by new sellers.