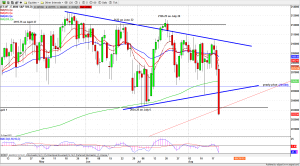 The three major US indices all plummeted right out of the gate yesterday and never looked back. The SP500 breached its 200-day moving average line and settled at its lowest close since early February. Now it is in the red for 2015, down 1.1% on the year, The ES is also down for the year. .

The price action yesterday was very bearish. It not only broke three major support levels, it also closed under its long-term uptrend line line. Technically speaking, ES confirmed that the May high at 2134.50 level was the yearly high. Now it has to move down to test 1970.25 or make new bottom for this year.