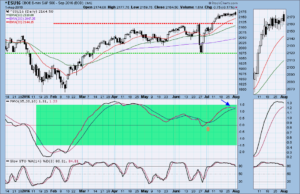 First day of August, ES made its best effort to make new highs during overnight trading, and touched 2177.75.

But the buyers couldn’t maintain the price, and it dropped to Nat’s key line after the open. It subsequently bounced back to her S1 level, dropped back to the key line again, then traded in a narrow range into the close for a minor loss on the day.

2173.50-75 will be first major resistance zone. As long as ES stays under it, a pullback down to retest 2159 or lower should be expected.

Daily PMO indicator is vulnerable to a move down, which could bring aggressive speculators into this market to push the price down. But the buyers may successfully defend the key support level again this time.