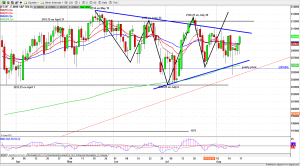 ES made a down-and-up move that looked a lot like last Wednesday: down from the overnight high into the open, then back up to a higher close on low volume.

The early decline was a reaction to the Empire State Manufacturing report, which was minus 14.92. The rebound was nominally due to upbeat housing stats. And it looks like traders are starting to believe the Fed may not hike interest rates in September.

Everything is based on speculation about the Fed’s next move. But the daily chart tells us that the 200-day moving average line is a critical support level. The Bulls keep showing up at that level, and the odds will continue to favor the buying side until that support line breaks.

Now the Street is highly anticipating the FOMC meeting minutes on Wednesday. The ES is likely to hold at/near the current level to form a base for an attempt to move higher. 2086-85 is today’s support zone. ES may have a small retracement to 2093.50-90.50 area for testing, but as long as 2086-85 zone holds up, traders need to continue focusing on the buying side.