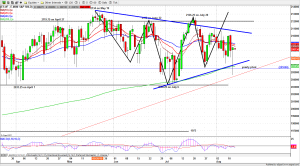 The ES had a second day of wide price swings yesterday, started by a second devaluation of the Chinese yuan in the overnight pre-market. But the losses were erased after the European market closed. By the end of the afternoon, the ES recovered all of the losses and closed five points above the prior close.

The intraday range is increasing. The ES made a high at 2085 after Tuesday’s close, then dropped to 2046.76 – below the support at 2050 – by the end of the morning session, then recovered all of the decline and closed higher, The price moved through roughly 40 points on each of those swings.

We previously warned our members in the daily trading plan to watch out for a big swing this week, with Thursday or Friday’s low likely forming the low for next week.

We think the big swings and the increased volatility are tied to the August option expiration. The option chain from Friday showing the open interest for SPX options illustrates the point. 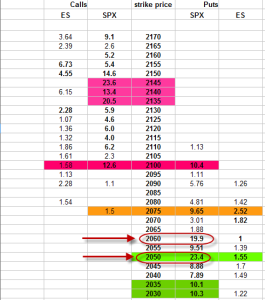 When China devalued a second time and the market dropped Wednesday, the process was repeated. The Puts at 2060 and 2050 were threatened again, and the sellers had to sell contracts again, accelerating the move down.

When the support at 2050 was busted, buyers – and perhaps the Fed – stepped in, and the Put sellers had to cover their losing contract positions again, accelerating the move up.

That’s the definition of a whipsaw and it has been an unpleasant couple of days for institutional traders selling Puts. But the option chain warned us Friday that sharp price swings would occur if the price dropped near those levels.

Today it is possible for ES to digest yesterday’s move by going sideways. 2070-68.50 will be first support zone and 2060-58 will be next one. As long as those two support zone holds up, we will continue to see shorts covering.