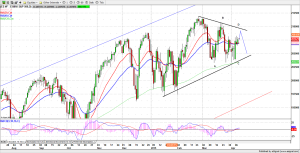 The US equity markets moved a little higher yesterday after investors got an opportunity to examine the minutes of the last FOMC meeting and pronounced them moderately good. The ES closed with a modest eight-point gain.

In the past few days the market has been dominated by algo trading programs, which are running the S&P down and then running it back up. They are just pushing the price around to run the stops and aggravate traders. But the effect is to keep the ES moving inside a congestion zone which eventually will lead to an explosive break-out. It could go in either direction.

Yesterday’s trading plan mentioned a “triangle” pattern developing in the daily chart. This development could change the A-B-C pattern we have been expecting into an A-B-C-D-E pattern.

So far ES remains inside that triangle pattern. We just have to be patient to wait for breakout. Once the ES breaks out of this pattern, the breakout direction — up or down — will become the next major direction for the market.

We may see a whipsaw move that could catch some traders off guard. But experienced traders will wait for a clear breakout direction before jumping on board the trades.