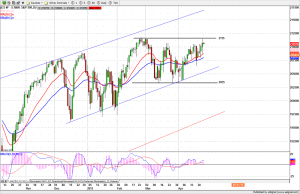 ES filled a gap at 2114 that goes back to March 3 in ysterday’s afternoon session before falling back a little to close at 2105 for the first time since the March 3 sell-off. Now everyone wants to know if the ES can make new highs this time. Based on yesterday’s closing price action, it is unlikely that the ES will make a new high in the early session, although it may later in the day.

So long as the ES remains inside its broad range 2115.50-2035, a morning session breakout is likely to be a fake. But later in the afternoon the outcome for the week will depend on re-positioning by institutional traders.

Today is the weekly option expiration day, and the most active strike price is 2100 level, which indicates today’s closing price could be near 2105. The durable goods report will be released early in the morning.

ES did break thought the 2105.50-07 resistance zone to get to the high at 2114.50 yesterday, one step away from the short-term major 2115.50-21.50 zone. Volume increased on the up-day. Today or Monday we need to see a follow-through on the upside move. If we don’t have a follow through, the ES can still fall back down again.