Some of the wonder is wearing off Nat’s fabulous system trades. After three weeks of virtually unalloyed successes, last week we had two trades — of 10 total — that failed to behave as expected. OMG!

On Wednesday the ES dropped substantially below her buy level, far enough that any reasonable trade would have been stopped out. It later recovered and turned into a good-sized winner, but a lasting dip below the Buy entry is a novelty this year.

Friday it happened again, in the oil futures. The price moved above her Short entry and stayed there, something that has not happened so far this year. Here’s the chart. 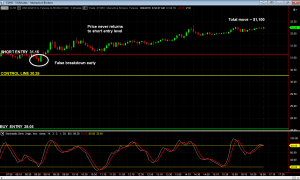 The price made a false breakdown early in the morning session, then moved back above the short ntry (31.15) and moved steadily higher all day.

Traders whop took the first false breakdown trade would have been stopped out, and never really had agood opportunity to re-enter, which probably saved them some money. And because the first breakdown occurred early in the session, some traders may have missed the entry entirely.

As they say in the military, once might be an accident, twice could be a coincidence, three times is enemy action. We’ll be watching to see if the market is changing its behavior, or just resting. 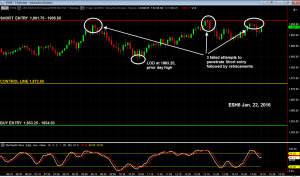 The e-minis were much better behaved. The price made three attempts to breach the Short Eentry, and retraced each time, for potentially profitable trades.

Two of those attempts stalled before they reached the entry level. There is a long iscussiona bout how to trade in such situations in the Member Resources section. Restricted to Dail Access and Full Access members.