A moderately successful day trading the Oil futures, at least for intraday traders, but stopped out in the S&P500 mini-futures for a modest loss. 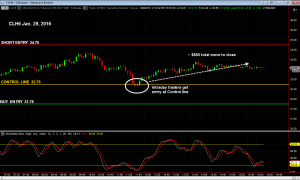 The oil futures dropped in the early session but halted the decline obediently at Nat’s Control line, before bouncing back to virtually unchanged on the day for the close.

Aggressive intraday traders could have gotten part of the first move down toward the Control line. It provided a reasonable trading opportunity, even though the price did not approach the short entry level.

The bounce off the Control line was quite a clear signal for traders watching the market, but the rally sort of dribbled out in no-man’s land without reaching an obvious exit point. An exit at the market close was probably the most reasonable outcome. It returned about $850 per contract for the full move. 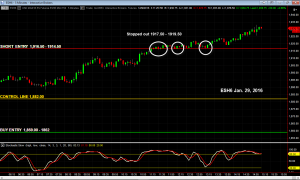 It is unusual for the ES to move very far past Nat’s buy or sell levels. They typically capture either the high or the low of the day (sometimes both) within a couple of points. Today was different. The ES moved nonchalantly past the Short entry level and eventually moved past the resistance at 1924-26 to close a solid 14 points above her Short level.

Our system trade methods use tight stops but call for traders to re-enter when they are stopped out. In this case they would have been stopped out at least three times, depending on what entry level they were using.

The short entry was 1914.50 to 1916.50. In our swing trader calculations we have been using the inside of the bracket: the highest buy entry and the lowest short entry.

Intraday traders likely got part of the move up from above the Control line to the Short entry, which was a decent trade. But anyone entering at Nat’s short level got creamed, more than once.