Both the oil futures and the ES produced winning trades today. The ES in particular showed a return to the big range days that were so profitable earlier in the year. Here are the charts.

The oil futures moved up steadily overnight and during the first part of the morning. But after the stochastic indicator made a low around 11:00 the price took off, and moved straight up, to and past Nat’s Control line. The full move was worth about $1,500 per contract 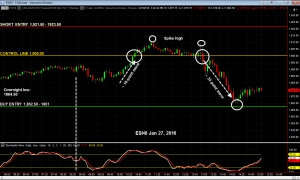 The move in the ES was substantially larger. The price almost touched Nat’s buy entry overnight. By the time of the day session open the price had moved up almost 15 points. It dropped back,a little after the open but quickly reversed and moved strongly up 20 points, moving through Nat’s Control Line.

In the afternoon it broke back down through the Control line and halted at the overnight low, just two points above Nat’s buy level.

Traders who caught both moves had a chance to take about 43 points (about $2,150 per contract) trading the move to and away from Nat’s Control line.