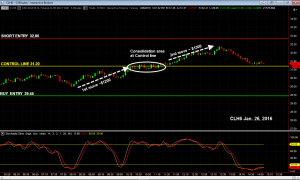 The best trades today were the oil futures, which offered potential profits of about $2,500 per contract in two distinct moves defined by Nat’s Control line. The first move, potentially about $1,200 per contract, started in the pre-market and stalled at Nat’s control line.

The second, potentially worth about $1,300 per contract, broke out from the Control line after noon and rallied strongly. Oil still looks volatile, especially compared with the ES today. 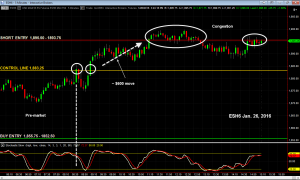 The ES made a decent move overnight that stalled right at Nat’s control line at the regula session open, and pulled back for a small short that her intra-day traders caught. It then rallied strongly back through the Control line in a long trade with a potential gain o about $600 per contract.

The ES is consolidating after the big down moves that started the year, and the intra-day volatility is much less than it has been.