This is the excerpt that will be repeated in the sidebar. We used to call this the deck

Let’s begin at the end and look backward.

For the Monday and Wednesday expirations, there were nice moves — first down Sunday night, then up on Tuesday night — that were good opportunities to grab cheap options with a chance of making money on the inevitable bounce or retracement.

It illustrates one of the problems with trading the short-dated options. The usual trading method is to buy an option — either a Put or a Call — when it is “unpopular” and likely to be mispriced. Often that happens after a sharp move. When the market is crashing and the Street is shouting “Sell, sell,” we are looking for a cheap (i.e. mispriced) Call to cash in on the bounce which usually follows.

The problem was the time. For traders in the Eastern time zone, both moves came in the small hours of the morning. By the time the pre-market trading began in New York, the option premiums had already adjusted to the move, and there was little room for profit 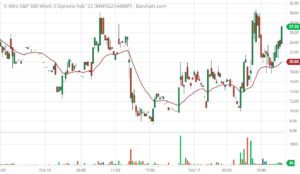 This is some art

For example. Until the sharp drop Sunday overnight the Calls with a 4425 strike price were too expensive to trade: they were priced above $20, which meant a risk of $1000 to enter the trade; after the market dropped 60 points in two hours they were trading below $6.00 and the risk was a much more reasonable $300.

But you had to get in then, not later. By the time the day session opened the 4425 Calls were back over $25 but there was no good entry point to get in. The potential profit was gone.

There was another trading opportunity Wednesday (Feb. 16) when the market popped after the release of the FOMC minutes. But the pop didn’t happen until after 2:00 p.m. when there was less than two hours before expiration, when any option that was not deeply in the money was valueless. Nobody said it was easy.

Trading the Friday expiration options was much easier.

Friday (Feb. 18) was a little bit scrappy. The monthly options expire on the third Friday of the month — as usual — which added a little extra spice to the usual end-of-week trading.

There was more talk of war in the Ukraine — the second time war talk escalated going into the weekend — and it exaggerated the existing jitters about the Fed’s intentions and the frightening January trading.

All in all, a very nervous session; nobody wanted to end the weekend with a position open. Here’s what the chart for the full week for the ESH22 futures looked like. (Click the chart to enlarge).