In the past two weeks the trading system we’ve been calling Safe Simple Trading has stopped working. We can’t recommend it to our subscribers until we fix it.

In the third week of February 2020 the markets changed dramatically, nominally because of the spread of the coronavirus around the world.

Up until that time the Safe Simple system had been working like a charm. From Jan. 2 to Feb. 17, the hypothetical trades accumulated profits for the year-to-date of a bit more than $7,100, trading a single lot on each of three contracts (gold futures, oil futures and the S&P500 e-mini futures).

But in the remaining 11 trading days the system lost money for 10 days; for many days in succession we took the maximum loss, $900 per day. By the end of February the accumulated profit was down to less than $1,500, and the losses continued to pile up in the first week of March.

The graph shows the outcome to the end of February. You can see the detailed results here. 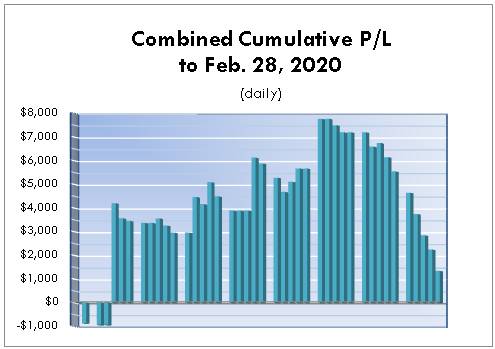 Each bar shows the cumulative year-to-date profit/loss at the end of that day for all trades.

The trading system calculates daily “inflection points” at the end of of each trading day which are used to set entry levels for the following day.

(To see the detailed trading rules, follow the links for the January and February results under the “Outcomes” tab on the top menu bar.)

Normally the trading rules produce about 7-10 trades per month in each of three contracts. Of those trades, typically four of ten are winners and six are losers. The average gain on winning trades is typically more than twice the loss on losing trades, so the overall system is profitable.

But these are not normal times. When the market broke, our three markets all moved in the same direction and the daily price range increased dramatically. The market blew past once reliable support levels, and the system initiated many more trades, almost all of them losers. In the last week of February the system placed 14 trades, much more than usual.

In effect the system was over-trading wildly, trying to catch a falling knife in a cascading selloff.

The market conditions that are bad for a fixed trading system can be very good for traders using Nat’s inflection points for discretionary entries and exits during the trading day. Anyone who can modify positions as the market moves can make a lot of money when there are big price swings and strong trends.

But we are trying to develop this system for casual retail traders who don’t have the time or patience to watch intraday price movements. That means it has to be able to withstand “black swan” events like the past two weeks.

We’ve been crunching the data on Nat’s inflection points for more than a year and so far it has been very proftable. Until now it has been easy to use, and consistently profitable — simple and safe. Now we have to look for ways to make the system less simple, but more safe.

We will continue to make hypothetical trades to look for fixes. In the meantime, if you are not monitoring intra-day price movement use Nat’s inflection points with extreme caution until the markets return to their normal patterns.

Please log in again. The login page will open in a new tab. After logging in you can close it and return to this page.