What is Safe Simple Trading?

Every trading day Nat posts a trading plan which in includes a series of “inflection points” for the markets she trades: gold, oil and S&P500 e-mini future contracts. Here’s a sample.

The inflection points are price levels where she expects the market to take some significant action. An existing short-term trend may stop and reverse at that price or close to it, for example.

Members with Full Access privileges use those levels make to initiate trades and adjust their positions during the trading day.

But members with Daily or Weekly Access can also use them to place resting orders that capture part of the market action during the day.

We call those trading methods Safe, Simple Trading and they were specifically developed for traders who can’t (or don’t want to) monitor market activity during the regular trading day.

What’s it good for?

Safe Simple Trading has a lot of advantages for people who want to make a little supplemental inccome from the market, but don’t want to devote a lifetime to learning how to do it.

It uses “resting trades” — limit orders placed before the market opens and cancelled when the market closes — to capture part of the price movement during the day, and adds “hard” dollar stops to strictly control losses.

How does it work?

Overnight, or any time before the market opens, our traders place two “limit” orders for each contract:

That’s the whole business. At the end of the day you count up the winners and losers.

If a trade was “stopped out” the amount of the loss is subtracted from your account balance. If the closing price is lower than your selling price or higher than your buying price, the difference is  profit that is added to your account.

There are lots of tweaks our traders use — larger or smaller stops, entering trades a bit before or a bit after Nat’s inflection points, trading a larger number of contracts in “hot” markets, using both first and second entry levels, etc. — but the basic process is that simple.

Does it make money?

By using hard stops the system forces you to adhere to the first rule of trading: control your losses.

And by providing entry levels based on traditional support and resistance — modified by Nat’s special sauce — the system puts you into trades that have a better-than-average likelihood of [su_tooltip style=”red” position=”east” rounded=”yes” title=”Warning” content=”See the warning under ‘Member Resources’ in the top menu.”]being successful.[/su_tooltip]

“Better-than-average” doesn’t mean that every trade is a winner. But the systematic use of hard stops means the winning trades are generally larger than the losers.

In general the ratio of winning traders to losing trades is about 2:3. or three losers for every two winners.

But the value of winning trades to losing trades is roughly 2:1, or two dollars profit for every one dollar loss.

That’s a formula for consistent profits, and it explains why we have traders who have been doing this with us since 2004.

You can see the full detals of the results for the first quarter of 2019 and the results to date for 2020 under the “Outcomes” tab in the top menu. But here’s a taste.

In the first three months of 2019 the method had:

In the first four weeks of 2020 the method had: 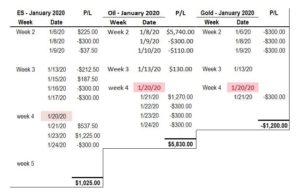 But that volatility won’t last forever. When the markets stabilize support and resistance levels will become more predictable — and more profitable.

But if you don’t grab it now you’ll miss out on some of the best trades of the year. The results pretty much speak for themselves.

Anyone can do this. It takes no more than a couple of hours a day. It generates substantial profits with relatively small upfront investment. And the cost of the memberhip that puts this within reach is unusually low.

How much does it cost?

$57 a month forever, as long as you maintain your memberhip. Just click the button for the details.