You will never retire. Get used to it. 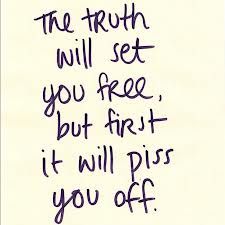 The last time we started ranting about the evils of the Federal Reserve’s Quantitative Easing program (QE) it was about how the Fed was pushing 50- and 60-year-olds out of the workforce and into “retirement” by creating a business environment that makes it more profitable to manipulate a company’s finances than actually make stuff and sell it.

Now here’s the rest of the story: the same process that is pushing you or someone you know out of a job is going to make it unlikely you will ever get enough of a pension to live on. But don’t worry; the same process has pushed the stock market to all-time highs, so somebody is getting rich. Just not you.

Hey, you win some, you lose some.

Here’s how it works

Since 2009 the Federal Reserve, the U.S. central bank, has pumped about $3 trillion into its “Quantitative Easing” program. In theory this increases the money supply and thus demand for goods and services.

In practice, the effect is to keep interest rates far lower than they would be otherwise. The Fed buys bonds so the price of bonds goes up, and the effective interest rate – the yield – goes down. When new bonds are issued, borrowers can offer much lower interest rates and still sell their paper.

For example, at the beginning of March (2015) Actavis, a pharmaceutical company, offered – and sold! — $21 billion worth of long-term debt rated just above junk status yielding a magnificent 3.8% interest. It was the second-largest corporate bond offering in history and it was over-subscribed 4.5 times.

(By way of comparison, the sovereign debt of the US government, which is supposedly guaranteed against default, yields 1.69% for 5-year bonds and 2.86% for 30-year paper.) 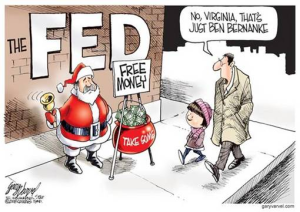 Abnormally low interest rates is not a bug in the QE program, it is a feature. The biggest debtor in the world is the US government, and this allows it to finance its activities without raising taxes and essentially without cost. (The planned rate of inflation nearly matches the interest owed).

The government loves it, of course, and has been spending the free money like a drunken sailor, much of it on undeclared foreign wars.

The banks love it, because it allowed them to transfer a lot of very suspect obligations to the public, then borrow low and lend high. And the stock market loves it too, because a lot of that free money ends up in stocks.

But the unusually low rates – effectively zero – distort the business models of companies like pension plans that need to earn enough to pay the benefits they promised.

If you have to invest a few billion of somebody else’s money, buying five-year notes at less than 2% is likely to get you fired. (We recently fired an investment advisor for doing that). So you go hunting for yield, and $21 billion worth of BBB-rated bonds are over-subscribed 4.5 times. The very next day Exxon Mobile announces an offering of $7 billion.

What is the money used for?

Some of the borrowed money is used for regular business purposes – in the case of Actavis, to pay for a previous acquisition – but much of it wanders back into the stock market in the form of stock buy-backs, corporations buying their own stock at record high valuations. 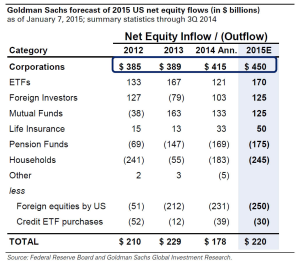 Leave aside the reasons for that, although it is worth noting that the effect is to goose the company’s stock price, and a lot of executive compensation is tied to valuation. Worry instead about what happens to the stock market when the free money ends, as at some point it must.

Goldman Sachs put together a nifty little table, quoted in the financial blog Zero Hedge, that shows the source of money moving into – and out of – the stock market.

For the last three years (and again in 2015, GS expects) the largest single inflow into the market has been corporations, largely re-purchases of their own stock. The largest outflows are households dumping stock, and pension funds, who have 10,000 Baby-boomers hitting retirement age every day in the U.S., now asking for their money.

Companies can afford to buy their own stock at record high prices because they can borrow on the cheap. Those purchases help to hold the market up. But what happens when they stop? We don’t have to guess; we have an example right here. 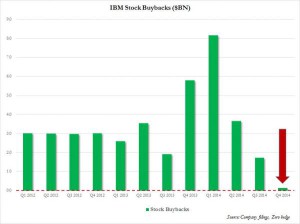 The company is IBM, the bluest of blue chips. During 2013 and the beginning of 2014 IBM made heavy purchases of its own stock, with the shares trading at one point in the $215 range.

At the height of the buy-backs, in Q1 2014, IBM bought about $8 billion of it own shares, gradually declining until by year-end share re-purchases had almost ceased. At the peak of the buy-backs IBM was trading around $200 a share. As the buy-backs declined, so did the share price. By the end of the year, IBM had traded as low as $150, a 25% decline. (It has since recovered slightly).

What’s that got to do with your retirement?

That affects your retirement in two ways. First, if you are counting on returns from the stock market to pay for your sunset years – perhaps through investments in a mutual fund or retirement account – you need to be concerned that when the cheap money goes away, which the Fed says may start as soon as this summer, so will your dreams of retirement. 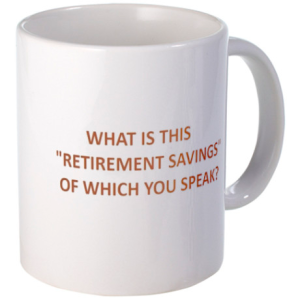 Corporate stock repurchases have been one of the pillars holding the market up. If/when that pillar breaks the market may not collapse, but it is unlikely to go up at the same pace. And at some point those corporations are going to need money again for capital investment, which is normally the function of the stock market. Where will capex come from?

The second issue is the inability of savers, whether saving as individuals or through pension funds or IRAs, to get an adequate return on their investments.

QE has forced savers, broadly defined, to either take on riskier investments – like IBM buying its own stock and watching it fall 25% – or invest in “safe” vehicles that pay too little to meet their obligations. In one case your saving are at risk; in the other, they won’t be enough to fund your retirement.

“A zero percent interest rate, yes, induces positives in terms of higher bond prices and stock prices, but also some negatives,” he said earlier this year during a Bloomberg TV interview.

“You know, it keeps zombie corporations alive because they can borrow at three and four percent, as opposed to the (normal) eight or nine percent. It destroys business models. It’s destroying the pension industry and the insurance industry because, basically, their liabilities can’t be provided for by very low interest rates.”

In effect QE ate your pension to benefit the banks, the government and the stock market. Maybe they didn’t mean to do that, and there is always room for the Law of Unintended Consequences to work its magic.

But intended or not, the US retirement system has become collateral damage to Quantitative Easing and the zero interest rate policy it spawned.

Earlier this month (March 2015) the American Society of Actuaries released its estimates for how long the average person in the US will live, the first revision since 2000. The actuaries say on average a 65-year-old man is expected to reach 86.6 years of age, up 2.0 years from the estimate in 2000, while a 65-year-old woman’s life expectancy has been increased by 2.4 years.

Good news? Maybe. Pension funds and other fiduciary agencies are required to use the new estimates in calculating their liabilities, which means longer pay-outs with no increase in assets. So your pension plan is now even more underfunded…. and it was massively underfunded before.

The good news is you’re probably going to live longer. The bad news, as the New York Times reported in a recent article, is ”the odds are that you will run out of money in retirement.” And if you don’t, your wife probably will.

This commentary originally appeared in TraderPlanet.com