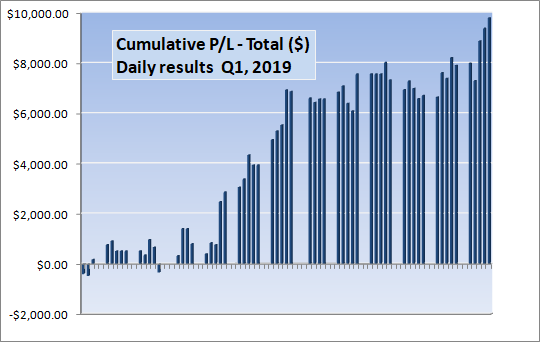 What are these trades?

How much money do they make?

What’s the best way to trade them?

We get lots of questions about the overall results of these calls, and about how to use them. So we ran a number of simulations comparing the inflection points to the actual market price action for the first three months of 2019. Here’s what we found.

There is a link lower down on this page to some of the raw data we used, so you can do your own analysis and ‘what-if’ scenarios. You may find an even more profitable way to trade Nat’s inflection points.

All of these actions can be accomplished with limit orders placed in the evening (Eastern time) after the markets are closed and the daily workbook is published.

There is no need to watch the market after the orders are placed, and because the orders are  good “day only” they qualify for (much lower) day — instead of overnight — margins

The entire process should require no more than an hour a day in the evening to place orders and record the results.

This is a mechanical, systematic method of trading, and limiting losses is automatic … as long as you faithfully follow the system.

The second and third largest daily losses would be $700 or $600 — two orders filled and both stopped out, with no offsetting winners.  That happened twice in the 61 days in this study.

We experimented with different stops, both larger and smaller.

We settled on stops of $300 for gold and the ES, $400 for oil. This level gave the best result for us, but Your Mileage May Vary.

In Q1 2019 trades on oil contracts were far better than the other two combined and accounted for most of the profit. Trades on the e-mini futures and gold showed only a modest profit. Compare the following charts.

Cumulative results for E-minis, Oil, Gold and all three combined for the first quarter of 2019. Each bar represents one day and shows the cumulative p/l including that day. Each group of bars represents the daily results for one week. Click charts to enlarge. 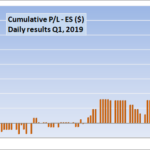 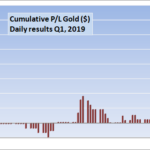 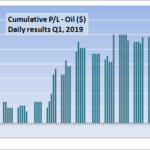 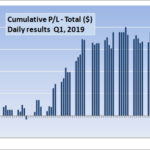 In view of the vastly superior results from the oil trades, we separated out the results if only the oil calls were traded. Here’s what we got.

In summary, there were roughly as many winners as losers, but the winners were roughly twice as large. The cumulative profit/loss for oil trades turned positive after the first two days, and stayed positive for the entire 13 weeks.

However markets run in streaks, and the relative profitability of different contracts can easily change. The daily range of oil during the time period was higher than for the other contracts and that affects the results; the more it moves the greater the opportunity.

Here is the download link for the raw data for February 2019, including a couple of tentative ‘what-if’ scenarios.

Here is the spreadsheet used to draw the charts and the associated data. (Automatic download in xls format, but does not open automatically. You need to save it to disk, then open the file from within Excel).