Last week the SP500 index struggled to rally, but failed in every attempt. First the Volkswagen scandal spread into both US and European markets; later the Biotech sector sold off sharply. Both turned the index negative to the end of the week.

We also had an incident where the Fed Chair, Janet Yellen, appeared to falter near the end of a speech Thursday, raising fears of a serious illness. The market sold off sharply, but later rallied back near the highs.

Lately we have seen large price movements in after-hours trading when volume is low. The same was true last week, with fairly large movements on four of the five nights in the chart. Most of the overnight moves are up, and they are typically offset by declines during the day.

Our option trades were successful last week. The trigger for selling Calls was never reached, but we had many opportunities to sell Puts, with an 1875 Strke price. When the market briefly dipped below 1900 the premium increased, despite the short time left to expiration. Ultimately all of the Puts expired OTM and we retained the entire premium.

Here is the annotated intraday chart 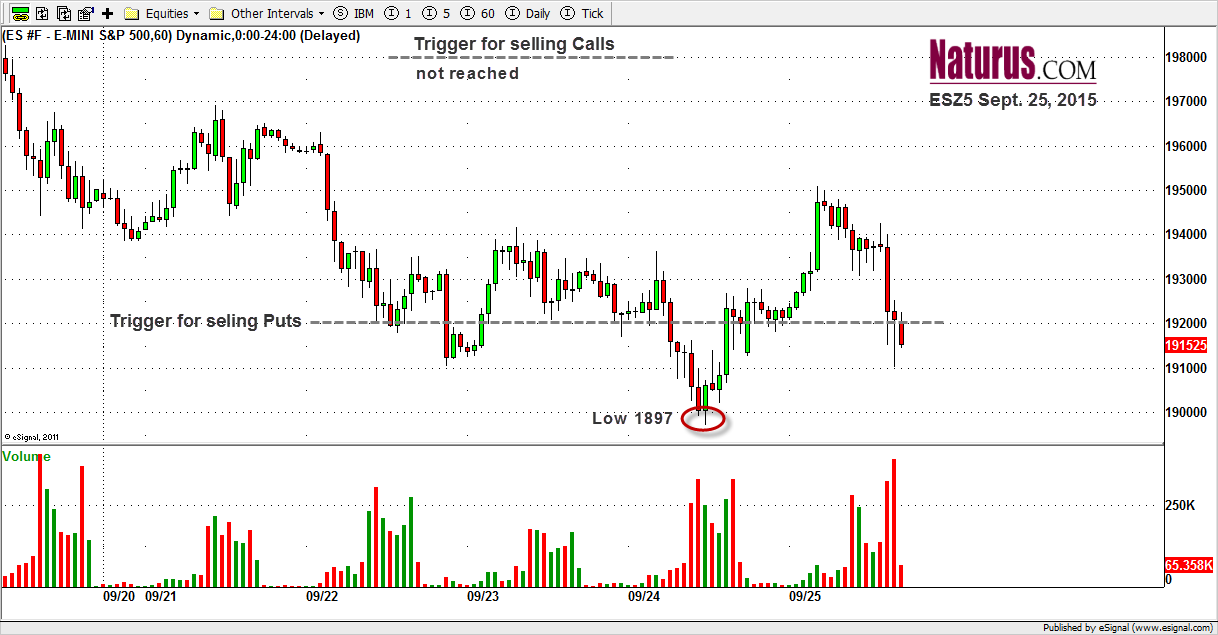 This week is the combination of the end of September and the beginning of October. Usually the week that ends-and-begins the month is bullish. We should see some bounce. But the former support has been broken. The bounce may not hold and may not change the short-term downside direction. A retest of the August lows remains ahead.

1935 is the mean line for Friday’s option expiration. Above 1935, Calls with strikes from 1940 to 1950 have been bought last week. It indicates that zone will act as first resistance. If the index moves above 1975 the shorts will run to cover and push the price up further, but barring some external event we don’t expect the price to move above 1975 this week. There are few Calls below 1925 strike price. That indicates selling could be triggered when the index moves below it. Price could drop into the 1900-1875 zone. Our system shows that ES shouldn’t close above the 1995 level; therefore, we can sell Calls when the price moves above 1950.

Nat’s trades for the week of Sept. 28