Last week the SP500 index rallied before FOMC policy announcement to front-run the decision to leave interest rates unchanged. After the announcement, traders started to “sell in news” and sent future contract back down to Monday’s market opening level for closing. Pump and dump.

The market started to move up early in the week, and by Tuesday our trigger price for selling Calls had been hit. Traders were anticipating that the Fed would not increase rates and that the market would move higher as a result.The price moved up about 40 points in anticipation of the Feds non-decision, and the enthusiasm among Call buyers allowed us to get decent premiums, especially after the price touched the 2005 Strike immediately after the Fed annopuncement.

That enthusiasm disappeared when the second half of the pump-and-dump scenario began to play out. By the close on Friday the price was about where it started on Monday. All the options we sold expired out-of-the-money and we kept all of the premium. 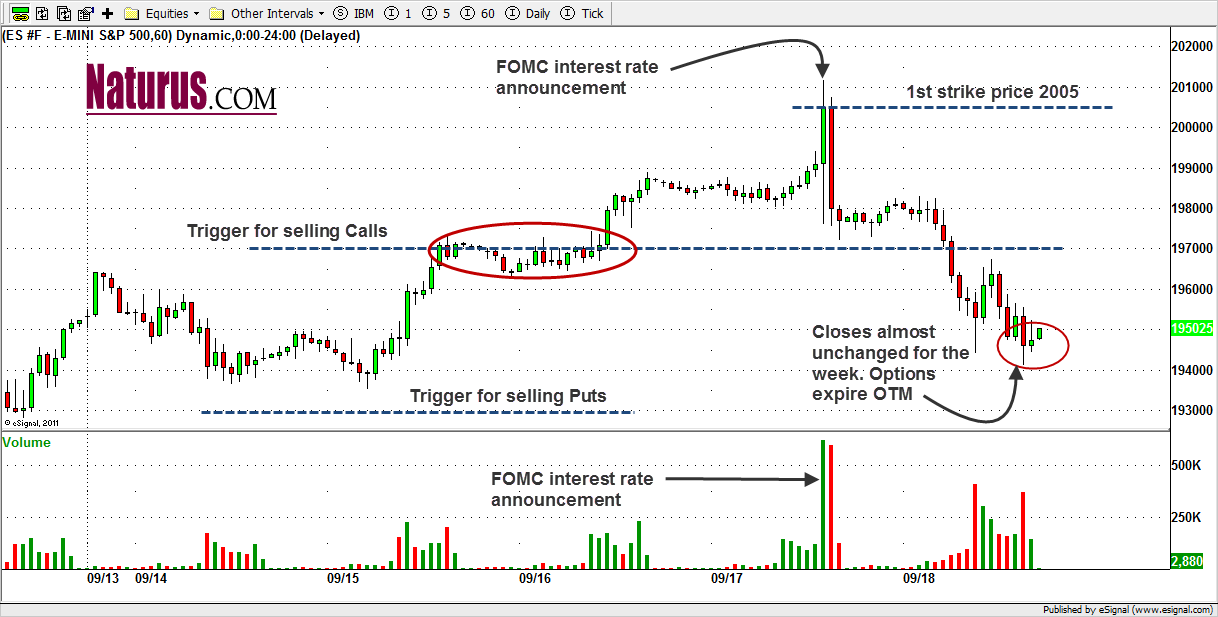 The quadruple witching expiration week is behind us. But uncertainty about global economic growth remains. Typically Fed inaction boosts bonds and gold and hurts stocks. It appears that the short-term bounce from the late August sell-off ended at 2011.75. Now a move below 1920 and a weekly close below that level will give a final confirmation

Calls were bought last week above the 1990 to 2000 strike prices. That zone will act as resistance this week. If the index moves above 2025 the shorts will run for covering. Otherwise, the index could move sideways in the1990 to 1920 range. But the absence of interest in Calls below 1920 strike price could also trigger as sharp decline if the index falls below 1920. Price could then drop into the 1900-1875 area. Our system shows that ES shouldn’t close above 2035 this week;. therefore, we can look to short the Calls while index price moves above 1975.

Nat’s trades for this week