The US equity market was joined at the hip to Federal Reserve comments again last week. The Fed — as usual — took no action on interest rates but talked a lot about a hike at some point in the future. That was enough to first drive the market down on Wednesday afternoon, then send it rocketing up a few minutes later (see chart). Sounds suspiciously like manipulation.

The ES and the SPX were on track for a record-breaking rally coming into Friday’s trading. The cash index had rallied 224 points — the biggest one-month increase ever for the New York exchange — until it dumped 18- plus points into the close. That still made it the biggest one-month rally since October 2010. The index had a 2.4% gain for the month and fully recovered the loss from the August low. 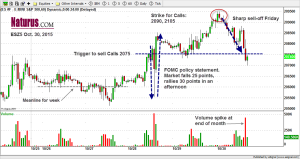 Our option trades last week called for us to sell Calls with a strike price at 2090 or higher once the ESZ5 traded above 2075.

That price was reached Wednesday after the FOMC statement started prices fluctuating. Premiums increased Thursday during the day and overnight sessions. We were tempted to cover Friday morning at the open, but held off and the price declined nicely into the close.

At the end all of our options expired OTM Friday and we retained the entire premium.

There are a plenty of economic reports this week. The employment situation report will be released on Friday, and will attract lots of attention; The Street will use it to gauge the likelihood of a Fed rate hike in December..It sounds silly – it is silly – but trading Algo systems will love it. Every word could move the market.

Here are the details of option trades for this week.

There were lots of Calls bought last week around the 2050 strike.

2065  will be the meanline for this week. If the price falls below that level, the buyers of Calls at the 2050-to-2025 strikes will slow the decline.

However if the index or ES drop under 1995 level, the Call buyers will rush for the exit or sell contracts to hedge their option positions.

If there is move above 2065 it is possible for ES to move back up to challenge last week’s high area. But our system shows that ES shouldn’t close above 2115; therefore we look for opportunities to sell Calls if/when the ES moves near 2085.

There are still lots of Put contracts open below the 1995 level. This indicates those Put buyers are likely to cover their positions if the index stays above the 2015 level, which could help to hold the ES up.

However, it the ES move below the 1990 level, it could trigger selling stops and accelerate the downside move. Our system shows that ES shouldn’t close below 1950; therefore we look for opportunities to sell Puts if/when the ES is below 2000 line.