SP500 index continued the ultra-short-term profit-taking yesterday. It dropped into its 50-day moving average line, but held above it for closing. At the end the ES closed down only eight points for the whole week. 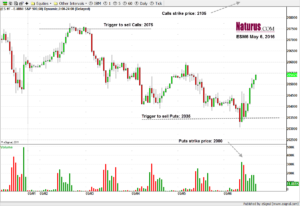 The best trade was on Monday, when enthusiastic buyers pushed the price up to the Call trigger, and increased the premium we could charge for 2105 Calls to a respectable level.

That proved to be the high of the week, and our Calls expired well out of the money, which enabled us to retain the whole premium.

At the other end of the week to trigger for selling Puts was not reached until the last trading day of the week, when the time premium for our weekly calls was almost exhausted.

There were limited opportunities to collect premium, because the RS price bounced quickly on Friday morning. The 2000 Puts also expired OTM.

Hi . Here is the member content for Nat’s option trades for this week.

Under the 2040 strike price, the 2025 and 1975-70 strike Puts have large open interests and trading volume. The index and the  ES have been unable to fall below 2020 to trigger selling. If that support fails, selling momentum could drive the price down near 1975-70 or lower. Our system shows that index and ES shouldn’t close below 1965 this week; therefore we look to sell Puts when the price goes below 2020.

Nat’s option trades for this week