Commentary for the week ending May 15 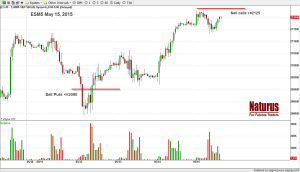 The mini-futures last week made a couple of nice moves that provided pretty good opportunities for option sellers.

The price dropped early in the week, which boosted the premiums we could collect for the Puts, then moved back up and those Puts closed out of the money.

The price action was tied to economic reports, which were pretty much disappointing across the board. The market took that as an indication the Fed will delay or eliminate any increase in interest rates, and promptly moved the futures up to a new closing high.

Here are the option calls we posted for members last week:

2100 remains the option mean line this week. Calls with strikes from 2120 up to 2150 have been largely bought last week. If the ES can break above 2125 level, the price could be pushed up to 2145-50. Our system shows that ES shouldn’t close above 2175 level this week; therefore, we could look for selling Calls with the strike prices in the table (2150 or higher) if ES rallies to or near the 2125 level.

Most of the Puts purchased last week were below the 2090 strike price. A move below 2090 level could push ES down toward 2080-70 for testing. 2060 should be the support level for this week. Our system shows that ES shouldn’t close below 2030 level this week. Therefore, we could look for selling puts if ES drops to or below the 2090 level.

The minis got close to our trigger for selling Calls, but too late in the week to make the trade interesting. The Puts were triggered on Tuesday and expired out of the money on Friday; we retained 100% of the premium.

The focus this week will be on the Fed, as usual. We have several members speaking and the release of the FOMC minutes this week. The speech by the Fed Chair on Friday could be important for the Friday settlement, which determines which strikes are in the money.

The indices (SPX and ES) could be pushed up to new highs if the FOMC minutes hint at a postponement of the expected June interest rate hike. Otherwise, the indices can return to the consolidation range again (see the Weekly Preview for details) if the Fed sticks to its schedule