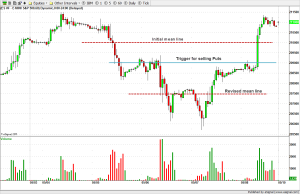 As predicted, ES did sell off in the first part of last week. But the sell-off was overdone and caused the option meanline – the strike price where Puts and Calls are roughly in balance – to drop down to 2075, which trapped lots of bears below 2070. Later ES rallied after the Non-Farm Payroll report was released and the option meanline switched back to the 2100 level again. Lots of scrambling for the players.

The ES price did not reach our trigger for selling calls, so no trades were taken. After the ES dropped below 2090 we sold weekly Puts at the 2025, 2035 and 2045 strikes. All expired out of the money and we retained 100% of the premium as our profit.

So far the Fed hasn’t done or said anything to indicate it intends to delay an interest rate hike. However the Street and the media are acting as if a delay is a sure thing, and are pricing in no rate hike in June. We’ll see. Meanwhile, based on the option volume, the 2135 to 2075 range continues to constrain the ES. Traders in both the index and the options are watching for a break-out – possibly in either direction – with a clear confirmation.