Last week the market formed a doji, following quite wide swings in both directions. The California shootings, and then an ECB announcement on QE that disappointed European traders moved the market sharply down.

Then the Non Farm Payrolls (pretty good) and a second ECB press conference promising more moved the market back up to end the week very close to where it began. Lots of movement, little progress. 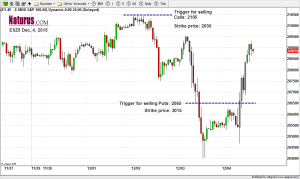 The volatility allowed us to make profitable trades selling both Calls and Puts. last week, and irrational exuberance among traders increased the profits.

When the price touched 2105 in the middle of the week, traders began thinking the futures would break the overhead resistance. We sold Calls with a strike at 2135.

When the market looked like it would end the week with a big loss, we were able to sell Puts with a strike at 2015.

Both expired out-of-the-money and we retained the entire premium.

After last week’s pump and dump, the S&P 500 index could struggle to hold above its 200-day moving average line (200sma) at 2065.50) and to find its balance point of support and demand. The volatility will remain high. This week is the  rollover, when futures traders move to the next contract. The December contract will expire next week, and the March 2006 contract will be the front contract traded on Friday.

Here are Nat’s option trades for this week.

The Puts have been bought below 2060 strike price. If ES moves under 2060 level, it could lead the index and the ES to retest last week’s low at the 2040 area. Our system shows that ES shouldn’t close below 2025 level, therefore we look to sell Puts while ES is below 2065 line.