SP500 index rallied early in the week then declined from Wednesday’s high into the close. It moved exactly the way we predicted in our trading plan. In the very short term an overbought condition prevented the price from advancing. But the direction of the trend is not changed; the uptrend is still in place. 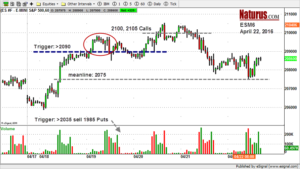 The option trades last week were a bit intimidating, but profitable for traders who followed Nat’s directive.

On Tuesday the price moved past the trigger for selling Calls with strikes at 2100 and 2105.

The price continued to rally and by Wednesday reached 2105, the second strike price in Nat’s trade. The new “Wednesday weekly” options may have played a part in that rally..

That induced some traders to cover their option positions at a loss. But those who held on for the settlement — and some bold players who sold in-the-money Calls on Wednesday — were rewarded when the price moved back below 2100 for the weekly close.

At the end of the week all our options expired out of the money and we kept the entire premium.

This section contains the option trades for this week. It is reserved for paid subscribers.

You can get instant access for as little as $9 per month at this link.