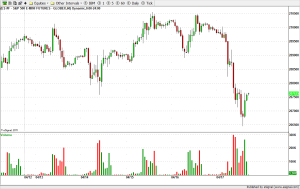 ES had a whipsaw week. It sold off on the first day of week, and rallied higher than the prior week on Thursday, then sold off heavily again on Friday. The volatility returned in spades.

The media said the sell-off was because of concerns over a Greek debt default. We think it was profit taking resulting from a rectangle pattern movement.

The price dropped 40 points on Friday before bouncing just enough to allow Puts below the 2075 strike to expire worthless. The Calls we sold at 2100 and higher, and the Puts we sold at 1975 and below were all profitable.

Based on option open interest on both sides this week, ES could remain inside its rectangle pattern range, 2105 to 2030 this week. If ES moves out of this range, it could cause a move in one direction until the price hits the ceiling or the floor, and then reverses. We’re expecting a quiet week (at least in terms of economic reports) and a little less volatility, which may make selling premium less exciting. We may still get some surprises from the  earning reports to stir things up.