The SP 500 index broke down its daily triangle pattern and dropped near September’s low area on Thursday. But it managed to hold above September’s low and recovered half the loss on Friday. It still lost 20 points for the week. 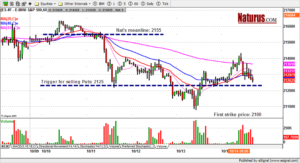 A pretty good week for option traders. The price dropped sharply below Nat’s meanline (2155) early in the week, so there was lots of time premium in the prices for the Puts we were selling.

But by the close Friday the final price was far above our strike price (2100) and we kept the entire premium for everything. As planned.