Last Monday, the SP500 mini (ES) had a panic sell-off at the open and dropped 130 points before it bounced a little into the close. Tuesday was a wild swing that eventually closed near the low of the day. But for the rest of the week the market marched resolutely up and ended in the green, after a week that saw both the largest single-day drop and the largest single-day rally in about four years. What a wild week! Exciting.

In fact it was too exciting for us. We scrubbed our options trades before the open Monday and took no option trades last week.

That turned out to be a bad move. All of our trades would have been profitable. The first strike price for Puts was 1800; the 1st strike for Calls was 2065. The market ended comfortably between those extremes and both Calls (if we could have found anyone to buy them from us) and Puts would have expired out-of-the-money, meaning we would keep the premium. And given the volatility, the premiums were very rich; we left a of of money on the table last week.

Here is the annotated chart for the week. 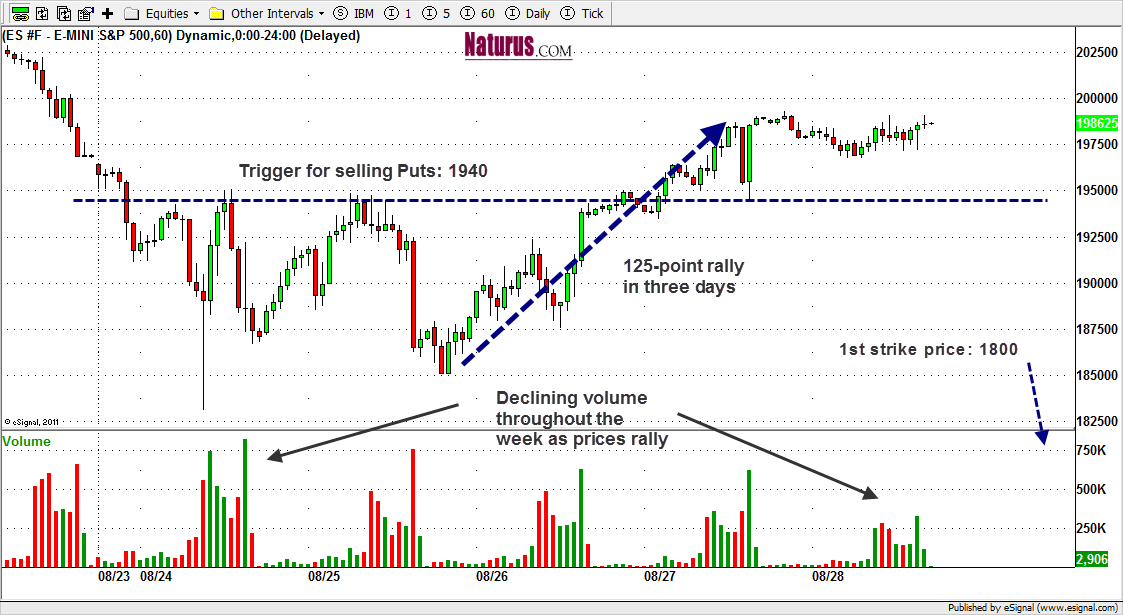 Last week’s selling was widely attributed to the the crash of the Chinese stock markets. But by Thursday the Chinese government pumped enough money into the system — for the second time — to halt the decline, at least temporarily. In the US, the Fed still seems to be still thinking about a rate hike in September with the usual hints and whispers but no direct statements. The market volatility is now essentially a home-grown issue. The Fed are busy focusing on the stock market, and nobody really has a clue what they should do with interest rates. Because of the big swing last week, Puts and Calls are largely out of balance. Also this week has two option expiration, on Monday and Friday. We may continue to see big moves. The ES could struggle to close higher.

Call side has not picked up yet. The open interest of on Friday’s expiration below 2065 strike calls is very small. That indicates that 2060-2065 level is our major resistance this week. But Our system shows that ES shouldn’t close above 2105 level this week which is very far away from the 2065 level. In other words, there could be a squeeze coming if the price goes above 2075 line. Therefore, we should pay attention to the 2025 line if ES has a strong move on Monday. We need to look for selling Calls as indivated in the table if the ES rallies above the 2025 level.

The open interest under the 2000 strike remains very heavy this week. The open interest for Puts  from 2000 to 1850 strikes is almost equal to the call side from 2000 to 2200 strikes. This indicates that the price can go either direction to have a big swing. Our system shows that ES shouldn’t close below 1850 level this week. Therefore, we could look for selling puts if/when the ES moves below 1900 at the strikes indicated in the table. But use a proper stop loss; there is still lots of volatility out there..