These trades have been overtaken by events. Avoid option trades this week.

Last week the Chinese stock markets crashed and triggered a correction in US markets. The concerns that slow growth in China and low demand will cause a global recession are increasing. Also the devaluation of the Yuan brought back fears of a new currency war.

Similarly, fear that the fed will still hike interest rates, despite the sizable market declines, is largely controlling  investors’ outlook. “Dump your long positions and ask questions later” is the trading mode we saw last week.

Traders who were part of our option trial last year have seen this before and should know what to do. For newcomers. last week’s action is an illustration of what can happen.

On Monday we were able to sell weekly Calls at reasonable premiums. All of those Calls expired worthless. We also sold Puts with strike prices at 2055 or lower once our downside trigger was hit Wednesday. All of those Puts were in-the-money at the end of the week, and the losses would have been substantial if we had not taken defensive action early.

When the declines worsened on Thursday we began selling contracts to offset the Puts we had sold previously. The effect was to limit our losses. We also began selling Calls with strikes near our entry levels. Note that these are not hedges; they are a directional trade to generate revenue.to offset some of the losses.

By the end of the week, the combination of the short contracts and the premiums we received let us escape with some losses, but without fatal damage.

Here’s the annotated chart for the week: 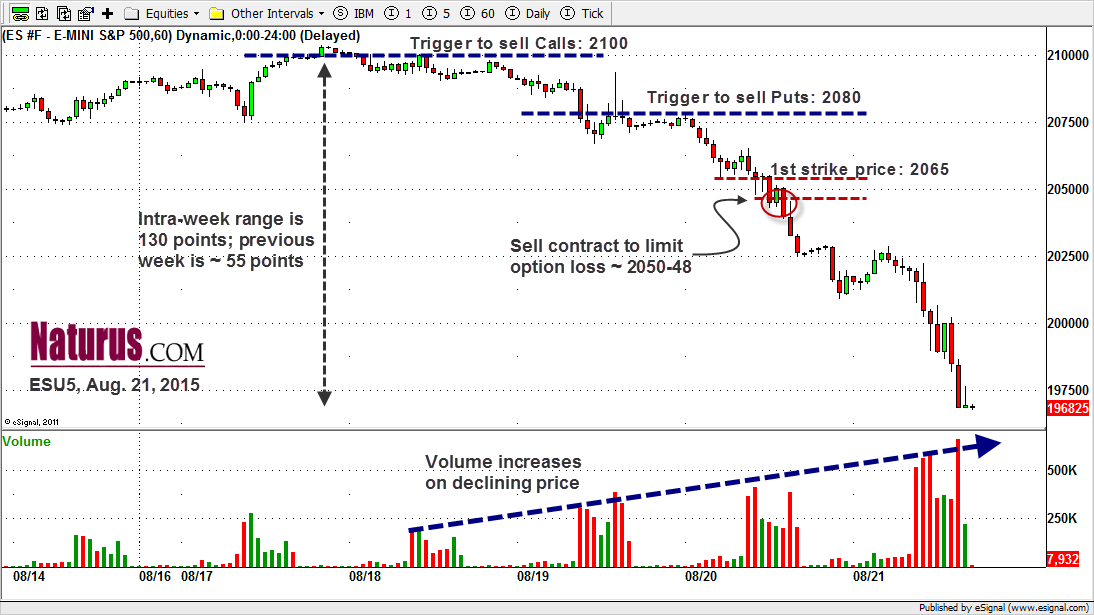 The fear will continue to control traders’ behavior. Last Friday’s closing price for the SP500 and ES all confirmed that we have seen the top of this year.Any bounce under the 2055 line will be pushed back down again. The market volatility index shot above 28 level for closing. This is only the first step; more high volatility should be expected.

Call side has decreased dramatically last week. The open interest for this week’s expiration for Calls below 2050 strikes is almost none. That indicates that 2050 level is our major resistance for the rest of the month. Our system shows that ES shouldn’t close above 2065 level this week even if price has a strong bounce above 2025 line. Therefore, we could look for selling Calls with the strikes in the table if ES rallies above 2000 level.

Put side has been largely increasing open interest. From 2050 to 1800 strike prices there were 335K on SPX and 87K on ES in total Puts were bought last week. This indicates that market is bearish. Also it could cause price to have a big swing. Before ES bounces, there are 3 levels —1985-2005-2025 — traders need to pay attention to. The breakout from each of those levels could squeeze the price up to the next one. Our system shows that ES shouldn’t close below 1885 level this week. Therefore, we could look for selling puts below 1885 using a proper stop loss.