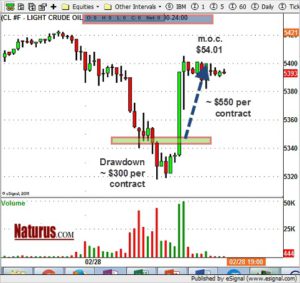 The price stopped short of Nat’s keyline in the Globex market and never gave an entry signal. That likely caused some overnight traders to miss what became a nice move down.

The market eventually reached and passed her sell level before bouncing back up into the close, which gave a decent long entry point.

The drawdown on the trade was about $300 per contract, which may have shaken some traders out. Those who stayed in realized about $550 per contract If they held to the close.

Subscribers to the trade room had the same opportunity and faced the same drawdown.