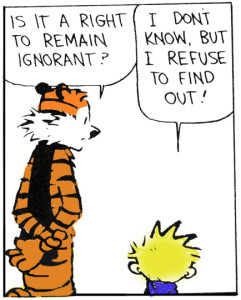 A few weeks ago the noted market commentator and blogmeister Barry Ritholz featured an item about the uselessness of year-end reviews and year-ahead predictions.

“Nobody knows nuthin’” was his summary, a phrase that is the secret mantra of both show business and the investment industry.

We were reminded of this by looking at the 2014 consensus predictions for the S&P500 (SPX) issued with great confidence a year ago: 6% growth for the year. The actual result? 11.39%, or almost double the expected return.

We did a little better than that, but we waited until 6 months later. Last summer we called the top in the SPX at 2080 for the year; on Dec. 29 it actually reached 2093.55 on risible volume. That’s close enough; we’re claiming success.

It is tough to make predictions, especially about the futures – pun intended – and the further out you go, the tougher it gets.

So don’t expect any insights from us about where the markets will be this time next year. We don’t know nuthin … and nobody else does either.

However we do have some cautious thoughts on what the market might do today and Tuesday, and even what might happen on Friday.

This week is crucial for setting the tone for the early part of the year, and there will be a lot of interest in arranging a positive result for the week. But the market sold off sharply the last trading day of 2014 and the first trading day of 2015, and the selling may continue this week.

We think the market is vulnerable, and we should expect some adjustments before it continues the rally, but an early correction will be seen by institutional investors as a buying opportunity.

The main focus will be on the non-farm payroll report on Friday morning. The first major support is around 1970-1965.

How to trade it

We use the S&P mini futures (currently ESH5) as a trading vehicle. Friday (Jan. 2) the ES was strong up in the early sessions but sold off sharply and left a hole between 2081-2086. This unfilled gap may not be revisited for some time.

Monday (Jan. 5) the ES could go sideways within last Friday’s range first. If it later makes a break above 2070.50 the price could push up and attempt to fill the gap. If there is a bounce up near 2070-75 our traders will look for a short-side entry to fade the move the first time ES visits that level.

A failure to break out upside, but instead moving below 2035, will be bearish, and a further decline toward 2020-18 or lower should then be expected. Watch for a momentum breakout movement below 2038-35.50. If the momentum is strong, buyers should stand aside until the strength runs out.