For the last few months Nat has been experimenting with a new method of calculating “inflection points” — places where she thinks the price action will demonstrate some kind of significant behavior.

During the first two weeks of 2016 we’ve been applying these “inflection points” to a different kind of “system trading” and getting some phenomenal results — literally almost too good to be true.

Things that are too good to be true usually aren’t, and we’re being very cautious about this. But the initial results are much more than promising. This looks like it could be developed into a fairly simple trading system with very good potential.

We’re telling you about this now for two reasons. One is to bring to your attention a trading method you might be overlooking. These extraordinary profits are related to a big increase in daily volatility so far in 2016. That won’t last forever, and you should take advantage of it while it’s there.

The second reason is to get your insights into what is happening, and suggestions for ways to develop it further. We want your comments and advice, which is why, for the first time, we’ve added a comment box at the bottom of this post. .

These are essentially swing trades. Each morning, around 8:00 a.m. Nat posts three re-calculations of her buy and sell numbers.(She actually posts new numbers for both the S&P500 mini-futures (ES) and the oil futures, but we’ll concentrate on the ES for the moment). 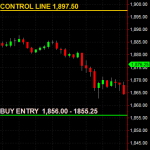 The numbers are a Buy entry level, a Sell entry level and a Control line. Here’s a snapshot of her chart for Jan.15, 2016, showing how they appear to members first thing in the morning.

(Note that the time stamp on the bottom of the chart is Chicago time, Central Standard. 8:00 on the timeline is 9:00 in New York).

When the price is at the Control line, make a determination about which direction it will take (there will be a link here soon to a separate post discussing the details of how to do that) and hold the position until is reaches either the buy or sell level.

There are lots of refinements in terms of triggers and exit strategies but that’s the fundamental trading method, and it could not be much simpler.

But in the first two weeks of the year that strategy has produced potential profits that are staggering. Here’s a summary of some of the best days of 2016 so far:

Here are links to the charts for these days, so you can see how the price movement developed.

Incidentally the oil trades, which are posted at the same time, are all profitable too, although not as spectacular as the ES..

There are some important caveats about this.

That said, obviously we want to develop this further. We have already asked one member to begin trading these “System Trades” (does anybody have ideas for a better name? Nat’s Secret Sauce maybe?) and the results from the first couple of days are profitable

We’ll see what the future results are, look for things to tweak, give some thought to triggers and filters and exit strategies, etc. It’s a long way from being finished, but the early signs are too promising to ignore.

Please use the comment box to let us know what you think and what we need to be careful about. We’re hoping for the kind of discussion that will help move this forward, but negative comments are as useful as kudos. Keeps us from falling in love with a project that may not merit it.

So that’s what’s up. What do you think?.