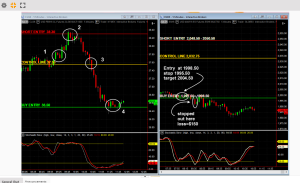 Monday Nat was watching two markets: the S&P500 e-minis — always open on her screen — and the oil futures. Members trade both.

Each day before the day session begins Nat sets three ‘inflection lines’ on her charts: a buy entry level, a ‘control line’ and a sell entry.

Those lines form the framework for the day’s trades. She is watching for movement toward or away from any of those lines.

The screen captures shows what her members saw around mid-day.

On the oil chart (left side of the screen capture – click to enlarge), the price chopped around the control line in the pre-market, then made a clear breakout (1) giving an entry signal for a long trade.

It continued to the short entry (2) a signal to exit the long position and go short. It continued back to the control line (3) and some traders exited there.

Others stayed on the short trade, and the price eventually got all the way back to the long entry, a definite signal to exit the short.

Anyone who stayed on that trade for the full movement (and some members did) made a profit of about $500 on the way up and $1800 on the way down for each contract. The whole trade was finished by 11:30 a.m.

The ES trade (right) was a loser. Instead of waiting for the day session to begin, traders jumped on the buy level n the pre-market, which was a mistake.

After a little pre-market chop the price dived, and members were stopped out for a three-point loss, worth $150 per contract. The trade was completed before the market opened 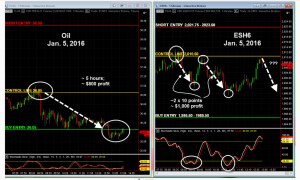 On Tuesday (Jan. 5) Nat is watching the same two markets, oil and the e-minis. Before the trade room opens she draws the same inflection lines on each chart. The position of the lines is based on her overnight calculations, and changes each day.

This is the screen capture around 1:30 p.m.(click to enlarge)

The price stutters around the Control line in the pre-market, breaks out briefly but immediately falls back, a signal to go short.

The price drops to the control line, breaks down briefly then returns, a signal to exit the trade.

Net profit for the move, approximately $800 per contract. The trade is completed by 1:30 pm.

Price breaks above the control line in the pre-market but falls back, a signal to go short.

The decline continues into the open, but the opening bounce and the reversal in the stochastic indicator are signals to exit the short.

Th price returns to the control line a second time on the opening bounce, but fails to reach it, a lower high and a signed to get short again.

Once more the reversal in the slow stochastic and the bounce in the price were a signal to exit the trade (some traders use trailing stops to exit.)

The two two shorts combined were worth about 20 points in the ES, or about $1,000 per contract.

There was a third short developing in the lunch hour, but our members took their profits and left for lunch. You have to know when to quit when you’re ahead.

The combined profit from both trades: about $1,800 per contract.

The usual disclaimers about past results and futures profits apply to these results, of course. They represent the potential profit, but slippage and missed trade executions and all the other gremlins that beset trading will reduce the amount you actual realize.

And profits like that, while they are not unusual, don’t happen every day. Sometimes the market doesn’t trade in the zone Nat predicts, and when that happens her members usually stand aside, because the signals are not working.

But they work often enough to make trading with Nat consistently profitable — that’s why some members have been with us for more than 10 years — and relatively easy, even for newcomers.

But you don’t have to take our word for it. Try it for yourself, while the Half Price sale is on. It gives you full access for two months.

That’s not long enough to ‘master the markets’ as one guru puts it. But it is long enough to find out if you are the one person in 10 who will make consistent profits in a a couple of hours a day, trading futures.