Last week: Portfolio re-balancing connected to the end of the month and the end of the second quarter helped push the SP500 index back up to the pre-Brexit level for closing. The sharp “V” sharp bounce eliminated the damage from Brexit waterfall correction.

This week: It will be a short week due to the US holiday. The momentum may slow down a little after the usual bullishness around the end and beginning of the month. A minor pullback should be expected. 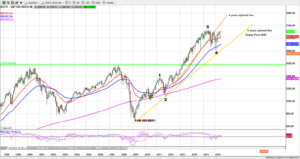 Half of the year has passed, an appropriate time to look back at the long-term charts and try to find out where the next trend is going.

Instead it formed a long round top, punctuated by stomach-churning declines and rapid V-shaped recoveries – just like Brexit – that never quite make a new high. Sometime in the next few months we’ll find out if that pattern will be repeated; if we will see another correction, or a continuation to new highs.

The first thing we will be looking for is a wave principle move. This year the SPX made a low in February at 1810.10. That should be the low of wave 4, which means the index should be in the process of forming wave 5.

So far we have not seen a confirmed Wave 5 top. The predicted wave 5 top could be about the same level as last year’s high at 2134.72. It could also be higher: above the 2225 level or higher if the index successfully breaks last year’s high and closes above it for the year.

The second thing we are looking at is the long-term double top pattern. The second top was formed at 1576.09 in October, 2007, and was immediately followed by the crash of 2008. Subsequently the index climbed back above that level in April 2013 and has remained above it ever since.

This broken resistance line has become solid long-term support. The full target for the breakout through that resistance should be in the 2337-2485 zone, which is still far from the current price. So far the index only completed about 60% of that target. In order to reach that target the price has to be held up and break the 2150 level.

However in the short term there is a potential double top pattern forming which could halt or at least delay any further advance. In the next couple of weeks we should see if this pattern is completed. That is a bearish pattern, usually followed by further declines. The crucial confirmation of that pattern would be a break below 2000 and a close close below that level.

Finally, we are looking at long-term trends. The four-year uptrend line was broken last year, and has been acting as a resistance line since then. But the six-year uptrend line still holds the index up. There is a good chance the SPX will stay inside those two yearly trend lines for rest of year. 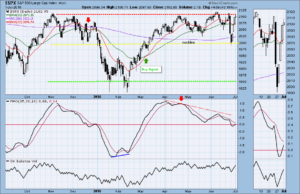 Now the market looks toppy in the very short-term. The 2125-2134 zone is long-term resistance ahead, which has held the index down for the past 11 months. This is the point where the rally must continue. Or stall.

The daily PMO indicator turned up, but it didn’t cross the signal line, so it still didn’t give a buying signal yet. The OBV rose last week, but still was lower than June’s high. A failure to see a follow-through rally this week could lead the index to have a minor pullback.

This section contains the detailed buy/sell levels for this week. It is reseetved for paid subscribers.