Last week: a highly volatile week. The SP500 index was down 100 points and back up 120 points, and regained control of the broken support at 1972.

This week: we could see a consolidation movement to digest last week’s moves. Price could go up if the Chinese market is stable. Fed members’ comments this week also will influence the market a little. But overall the most exciting move is behind us for a while; the market should now start to store energy for the next move. 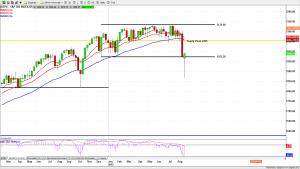 The SP500 finally got its intermediate-term correction move last Monday. The index not only broke through its three-month support at the 2040 level, also it broke the 10-month support at 1972 – nominally a reaction to the Chinese market crash. But later the index successfully held up last October’s low and recovered the total weekly loss. It ended with a little gain on Friday’s close. What a wild week!

I want to take a moment here to congratulate the traders in our live trade room who not only kept calm while the market was crashing but made very large profits on their trading. Last week we posted a series of downside targets and our traders hit every one on the way down, and most of the upside targets on the bounce.

Now they want to know: “How high should the index bounce this week?” Read on for the answer.

So far the index didn’t do any real damage to the long-term. Even though the “Death cross” lines are very close to each other on the daily chart, they haven’t crossed over yet. Often price will have to test that “Death cross” line in the short-term before it resumes the downtrend again.

Recently US markets have all been driven by external news or events.The mild media hysteria and public musings by Fed officials on interest rates added fuel for price volatility and big market swings.

The nominal cause of the US decline was market turmoil in China. But how much attention should we pay to events in China? The short answer: less than we have. Events in China’s financial sector are widely misinterpreted in the West.

For example, part of the upheaval in Chinese markets is due to currency exchange imbalances. China has been holding large USD reserves (mainly in Treasuries) in part as a hedge against the withdrawal of initial investments by international companies operating in China.

The withdrawals, after a 20-30-year holding period, were expected to increase sharply by 2011, but a devaluation of the USD against the Yuan (from about 8.00 CNY/USD in 2006 to about 6.05 CNY/USD in 2014) made it difficult to withdraw funds at an unfavorable rate. The recent upward re-valuation of the Yuan is making it easier for international enterprises to repatriate their profits… and China is selling US treasuries in bulk to pay for it.

And while the Chinese markets are down sharply (after an unprecedented surge earlier this year) they are still above a critical support area, the former break-out level around 2500. It appears to be holding, thanks in part of very large-scale government interventions, and the Chinese market seems to have completed its second push down. A third push should be expected sooner or later, but I don’t think it will crash again.

We don’t see a crash in the US market either. As long as the index stays under 2000, the downside is not over yet and at some point the index still has a chance to move back down for testing. But we see a correction, not a crash.

In comparison to the 2010-2011 situation, the US economy has improved considerably. Most of the banks are in good shape – they should be, after $3 trillion of QE – and the real economy, despite many weak sectors, is still above water. Not robust, but not dying either.

Even if the Fed decides to raise interest rates in September (we think they will not) it shouldn’t hurt too much. And next year will be the presidential election, which usually means no crash until after the votes are counted … say November 2016.

This week is the end of August and the beginning of September. The index is in a normally bullish period, which could help to hold the price up. However there is resistance overhead; short-term traders should pay attention to the resistance lines at 1990 (the current key line), 2025 and 2065.

1972 was last December’s low. This line controls the downside move. As long as it holds the index up it will force shorts to come in to cover. But as soon as – or if – the price goes under 1950 it will re-trigger selling pressure and push the index further down to fill the unfilled gap in the 1940.50 area. Monday’s closing price will be very important to determine the price moves for the rest of the week. 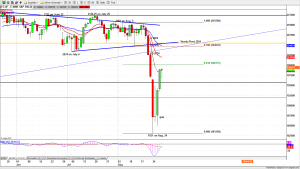 Last Friday the ES had its third day bounce. The trading range was narrow – relatively speaking; only 25.50 points. The price closed above the 10-day moving average line, but the volume was less than any of the previous four days.

Today is the last day of August. Overhead is the Fibonacci 62% retracement level around 2001.75; below is the bottom of the previous sideways range around 1960. For the end of the month the price could close above 2000 level; it could also close in the previous support zone, which is roughly 1970-1960, and perhaps as low as 1936.50.

Which it will be will be determined by external factors: the reaction to the bounce in Chinese markets, for example, or the comments that escape from the Jackson Hole conference.

The ES is currently testing resistance areas and back-filling some of the air pockets left behind in the decline. How far it goes up depends on how many shorts are still left to cover. 2001.75 (Fibonacci level) and 2023.50 (the 20-day ema) will act as resistance, and we may see sellers there.

On the downside, the 1971-61 zone (broken former support from the eight-month sideways range) and 1938-34.50 (an unfilled gap zone) will act as support today. Bulls definitely have to defend the 1971-61 zone to prevent a price decline from triggering renewed selling pressure.