Last week: After the dramatic 50-point drop that closed the prior week, last week’s action in the SPX was primarily consolidation in a range roughly between 2160 and 2120. However the market has been making a series of lower highs and higher lows forming a wedge pattern that sometimes leads the price lower.

This week: The major action this week will revolve around the Fed Open Market Committee meeting on Tuesday and Wednesday, and the Chair’s remarks and press conference that follow it. This is the Fed’s last formal opportunity to raise interest rates before the election. The market is expecting no rate hike (as are we) but will be stalling until the decision is announced. Bombing attacks in New York city on the weekend may affect Monday’s activity.

a) Long and intermediate term 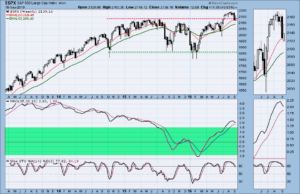 The long-term chart changes slowly, but the recent price decline is beginning to show up on the intermediate-term outlook. The Fed’s actions (or non-actions) this week will have a substantial impact on what happens next.

We are watching the 20- and 40-week ema’s (the red and green lines on the upper chart). The market closed above the 20-week ema, but the two are converging, and aggressive selling could make both turn down. The 40-week ema may form support around the 2090-95 level.

The PMO indicator is in over-bought territory, but not extremely so. It may turn up further (i.e. become more overbought) if the Fed does not raise rates and the market bounces. If there is a rate increase (unlikely) the PMO (and the SPX) may fall sharply, to the point where the two indicator lines (middle graph in the chart) cross. That would constitute an intermediate-term sell signal.

Absent a Fed rate increase, the slow STO indicator (bottom graph on the chart) may also turn up, which would constitute a buy signal.

There is still an inverted H&S pattern in the SPX weekly chart. It is unchanged for the intermediate and long time frames, but price action this week could change the outlook. 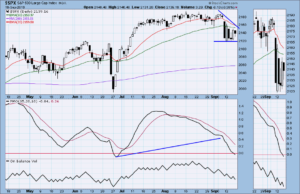 We may see a short-term bounce soon if a sharp dip pushes the PMO indicator into the extremely oversold territory and triggers an oversold bounce.

Recently the index has formed a wedge pattern with the bottom of the wedge around 2120.

The price could break below 2120 and test the 2100 psychology support and/or move lower to the 2060 level, which is an intermediate-term major support line.

But as long as the index doesn’t close under 2050 level, a sharp bounce should be expected.

If there is no breakdown move, but instead the index holds above 2120 (last week’s low) the 2165 line will be the first resistance to prevent the price from popping.

A move above 2165 could push the price up to the 2185-95 zone. But we doubt there is more room for upside without a buying signal from the PMO.