Last week: The short-term market movements have become almost entirely a function of the Fed’s public statements. Last week the market largely stayed within a 10-point consolidation range from 2140 to 2150 until the Fed Open Market Committee minutes were released, when it rallied roughly 30 points

This week: The first of the debates in the US presidential elections on Monday night will probably attract the largest audience for a political event in the history of the world, and may have some impact on the markets. The is little else in the way of economic data that looks earth-shaking, but the news, if any, will assume greater importance as a result. It is the end of the month and the end of the quarter, so there will be dome choppiness in the price action.

a) Long and intermediate term 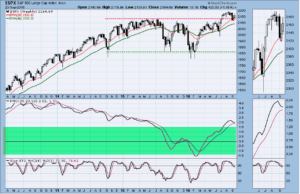 This is a confusing time for investors who focus on the broader market in the long and intermediate time frame. The market remains high, eking out new all-time highs from time to time, but stuck in a consolidation zone that goes back to the early months of 2015, or beyond.

The brief efforts to move higher seem to have momentary success, but have no staying power and fail to ignite the kind of enthusiasm that might generate a sustained rally. But any attempt to move the market down is met by suspicious “panic buying” that drives the market back up. The shorts have been getting murdered for a year or more, and many have finally capitulated.

The economic fundamentals don’t look much better. Earnings are in a steady decline, and companies are finding it more profitable to borrow at historically low interest rates and use to money to buy back their own stock, rather than investing it in plant and equipment.

The “real economy” – to the extent financial markets care about that – is not expanding and is probably in recession now. The market looks like one harsh word in the right place would be enough to start a waterfall.

The long-term (weekly) chart isn’t awful. But it I difficult to find anything in it that encourages new long positions. The PMO indicator is not encouraging for Bulls, and a pull back seems more likely than a true rally at this point.

Treat this market with great caution, at least until after the US election. The risk on the downside looks a lot bigger than the reward on the upside, as we have been saying for most of this year. 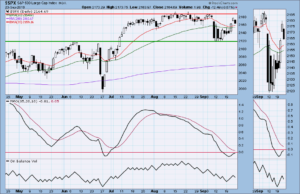 Friday was somewhat discouraging for the Bulls. On Wednesday and Thursday the SPX rallied about 40 points from the low of the short-term consolidation area established while we waited for the FOMC announcement. On Friday it pulled back about 15 points – note the Fibonacci relationship – on reduced volume.

The lack of sustained follow-through is the key. The market broke out decisively from the wedge pattern formed over the last couple of weeks, but has not recovered all of the ground lost in the second week of September. The momentum ran out, and the price ground back down.

If we don’t see a push past last week’s high around 2180 today or tomorrow, we will be looking for a retracement back into last week’s consolidation area 2140-2150.

If that level does not hold the price up, watch for a further decline toward 2120, where the earlier decline was halted. The US election is paralyzing the short-term market; not much encouragement for the Bulls, but great fear among the Bears.

This section contains the detailed buy/sell levels for this week. It is reserved for paid subscribers. Previous market previews are available free of charge in the archives.

ES had a minor pullback move last Friday and managed to fill 2156, Thursday’s gap. So far the pullback was small, and took almost a day to get to a 10.25-point trading range.

2134-35.50 will be first support zone. As long as ES holds price above that support zone, a bounce from it should be expected, if there is no dramatic news moving the market. Sell on strong rally and buy on weakness later will be seen today.