Last week: The SP500 index retraced and erased the gain from the initial oversold bounce the previous week. The sell off began again on Monday and closed at the low end of the weekly trading range.

This week: the US market will resume trading on Tuesday after the Labor Day holiday. Typically, by the end of the four-day week all traders will be back and the volume will increase. The important level for the week will be 1950. If the market fails to move above and close above that level there will be a great danger of moving to a series of lower lows.

The SP500 broke below the broad eight-month sideways range on Aug 24, and has spent the past couple of weeks whipsawing in an attempt to digest the move. It is a new environment.

The process has also been defining the new short-term battleground between the Bulls and the Bears – in effect a new consensus about the price levels each side will defend and attack. We think this tension about where to fight may extend the decline in the short term.

So far the index has lost 20% from the top it made in May. The 20% loss has been treated as a correction, a pattern move similar to the August-to-October move in 2011. (See chart).

We may have a test of that hypothesis this week if the price approaches 1820, the low made last October. A break below 1820 will confirm that a bear market is emerging, and that this is not just short-term correction.

These “death crosses” have occurred on most of the major indices: the DOW 30, Russell 2000, NYSE Composite, Wilshire 5000, S&P500, S&P midCap 400. There are also over 300 S&P500 large-cap stocks that have experienced similar crosses. According to Dow Theory, the sell signal for long-term investors was given last Monday.

There has not yet been final confirmation of that signal, but the long-term uptrend is clearly changing its direction after a long topping consolidation area. The breakdown of the long consolidation range directly threatens the long-term support zone at 1862-1820, and we may see that level challenged this week or next.

Commentators may want to blame the Chinese market crash as the immediate cause of the US market decline, but we think the major issue is the dramatic shift in market sentiment. Once the basic posture of traders changes, it is hard to change it back. Who will buy today, if the price will probably be lower next week? 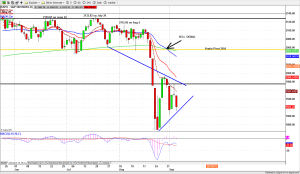 Since then, the SPX has kept the price below the short-term momentum resistance line (10 ema). There is a very short-term uptrend line (blue) and the price managed to close above it last week. That is no guarantee the line will hold this week.

The uptrend line is part of a potential triangle pattern. That is a bearish continuation formation. A break below the 1900 level will give a bearish outlook and an indication the index will go lower. The lower indicator (MACD) is also bearish. It indicates that ultra-short-term bounce from the August low was complete on August 31.

There is a large chance the index will fail to hold up and go lower in coming days. However a stable Chinese market may help hold the index above 1900 for this week. The week after that we will get the Fed rate announcement, right in the middle of Quad Witching week. Expect excitement. 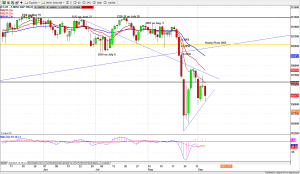 Last Friday ES gapped down at the open and stayed below the gap for the rest of the day. But the closing price was two ticks above the regular hours opening price, which formed a doji candle for the regular trading (not visible on the chart). This could result from the combination of option expiration and the rush to the beach for the holiday.

Before the Tuesday regular hours open, the ES may have already experienced some pre-market movement. If news from China is going to drive the markets the long weekend has provided lots of opportunity to move the price in a relatively low-volume environment. Tuesday morning the ES could just pick its continuation move after the market opens.

The potential triangle pattern marked in blue on the chart has the resistance line around 1975-70 and the support line around 1875-80. If the price moves outside the resistance or support areas it could trigger a momentum run up or down to the next level.

On the upside, any attempted rally will meet several strong resistance lines (the 10, 20 and 40 ema’s) and those lines will restrict any price advance. On the downside, there is little additional support, and a break below 1898 could push the ES down to 1875 or lower toward 1850-31 zone for testing. Our traders should continue to focus on the short side.