Last week: the index started with a solid rally, up 1.5% from the prior week’s close, but the rally reversed and the index was in negative territory by the weekly close. The Volkswagen scandal and the implications for German car makers plus a sharp sell-off in the Biotech sector were contributing factors. The market was also spooked by what appeared to be a momentary illness affecting Janet Yellen during the delivery of a speech Thursday afternoon.

This week: There are 11 Fed members giving speeches this week, and the Non-Farm Payrolls will be released on Friday. External news could move the index in either direction. The end-and-beginning of the month is usually a bullish period, and the index should hold up above 1900 this week. But the price is also vulnerable to short-term and intermediate-term moves based on the correction pattern. 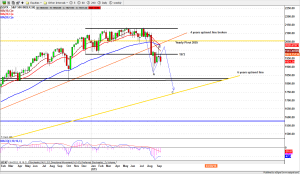 The long-term outlook has not changed much. The SP500 index remains in a short-term and intermediate-term correction process. Once the index broke its1972 key support line, it began an intermediate-term correction. The original yearly pivot level 2055 has been moving down to the 1965 area. As long as the price stays under 1965, the index needs to complete the correction first before it can resume any rally again.

The six-year long-tern uptrend line is below the current price, lying around 1750 next month. It will act as a major support line.

There is also an A-B-C correction pattern, which could be described as a bearish symmetrical pattern. The full downside measurement for this pattern is also around the 1750 area, and overlaps the six-year long-term uptrend line. If the index moves below 1920 for the weekly or monthly close this week, that target is likely to become the goal of every short-side trader.

The 1972 line continue to be short-term resistance this week. As long as the index doesn’t close above it on a weekly basis, the short-term end-of-month bounce will be limited. It shouldn’t change the intermediate-term downside direction. B

We expect to see high volatility continuing this week. 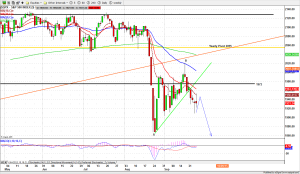 S&P500 index turned negative again last week. The sharp sell-off in biotechnology stocks spread to the rest of the market on Friday, after the Volkswagen sell-off.

The support was the lower line of a triangle pattern (green) that we have discussed several times in the past few weeks. Typically, such a break of support is followed by a continuation of the previous trend, so many traders were looking for a further downside breakout move – like the one that occurred on Friday of last week.

This week is a combination, both the end of September and the beginning of October. Usually this is bullish, and there may be some window-dressing this week.

We may see the index holding above 1900 this week, but with back and forth moves to shake out the weak hands on both sides. But as long as index doesn’t close above 1972 the short-term trend remains down.

Based on the daily chart, an A-B-C correction move is in process. The B top was posted after the lower line of the triangle pattern was broken. The C low process has just begun. The destination for the C move could be lower than August ‘s low at 1860. Therefore this week’s bounce (if any) could get lots of attention from short-term swing players, who will target the 1860 level for the short-term decline. 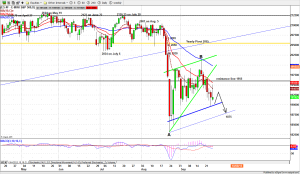 Last Friday ES gapped up strong at the open, and held up the gain until 2pm. when it suddenly turned around and sold off. It not only gave up all gain made in the morning session, it also closed a meager two ticks above the previous day, and near the weekly low of the trading range.

The price action was quite negative at the close. That may results from the reluctance of players to hold positions over the weekend, but it may also indicate a growing consensus that the next move is down. In the daily chart, the short-term trend remains down, and the ES broke the support from uptrend line of the triangle formation and clearly indicates that B top had been posted and C move down has begun.