Last week: The Fed left interest rates unchanged at Thursday’s FOMC meeting. This “inaction” — based publicly on concerns about global economic growth and fear of deflationary effects from the strengthening US dollar – appears to have ended the short-term bounce in the US market.

This week: Mrs. Yellen has said the US economy still looks solid and that a rate hike by year end is still possible. We think the Fed has already missed its chance to raise rates for some time. Consider the headwinds affecting the US economy: war becoming more serious in the Middle East; refugees and a slow-burning war in the Ukraine disrupting European unity; China melting down; the oil economy in depression. And US equities are now entering the least favorable season. The Fed is becoming a sideshow, and investors are bailing out. We expect more will leave in the future. This isn’t over.. 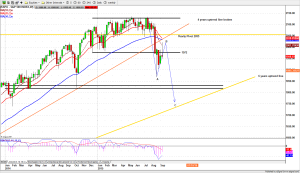 The SP500 has not been able to make a weekly close above its broken support line at 1972 for the past three weeks. That suggests the long-term uptrend is preparing to change direction. The price not fallen below the long-term major support line yet, but the short- and intermediate-term Bulls have not been able to defend the gains they made on the relief rally from the August 24 crash. That is a major concern for buyers at this stage.

There is also a potential bearish symmetrical pattern developing with a major downside target around the 1750 area. The high made this week at 2020.86 is looking like the short-term top of the retracement from the late-August plunge. That would be confirmed if the SPX makes a weekly or monthly close below 1920. It is looking like there is more downside risk than upside potential, and investors are losing interest.

The 1972 line will remain the short-term resistance area this week. As long as the index doesn’t make a weekly close above it, the short-term and intermediate-term trend should be down. The index will continue to be volatile. History not only tells us that the period from the end of July to the middle of October has seen some big drops, it also shows that October is known for its crashes. With the markets currently moving down, we should keep this perspective in mind. 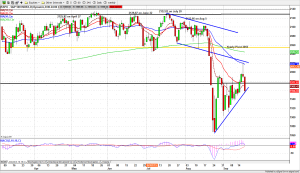 S&P500 index faked a triangle pattern breakout, and ran the buy stops above the resistance area during the Fed rate announcement and press conference. Then the price turned around and went south, giving a big reversal signal. Buy the rumor, sell the news: a well-worn pump and dump strategy.

Based on Friday’s closing, the bounce should be ended, and a second declining movement should be on the way. A move below 1930 level will confirm that last Thursday’s high is the short-term top.

This week 1978-1968 zone will act as the first major resistance zone for the SPX. As long as the index stays below it, the Bears will keep fighting for the lower support zone at 1935-40. A break below 1930 line could directly open a door toward 1900, the first psychological support line. The short-term indicators are bearish and still have an overbought condition.

This week the short-term trend should be down. Any bounce could be countered by the sellers. But the high volatility will continue for some time. There is a very active economic calendar for the eight trading day left in September, and Janet Yellen and four other Fed members will speak this week. That, and other external events, could disrupt the progress of the market for the rest of the month. 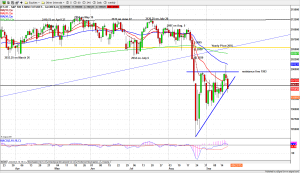 ES sold off right after Fed rate announcement. It gave up a 37.5 points gain made in the previous three days in the last day and a half of the week. It closed below all daily momentum support lines again on Friday and gave a selling signal again.

Today the monthly pivot level (1965.50) will be first resistance line. As long as ES stays under it, the price should continue to decline and head toward the 1900 area to search for very short-term support, especially if ES can break through 1927.25 and run the stops below that level.

Last Friday’s unfilled gap at 1977.25 is very important for the short-term decline. It needs to remain unfilled in coming weeks in order to encourage the sellers to push ES down to complete retesting the August low. Traders should focus on the short side on any bounce under the 1972 -65.50 zone.