Last week: The index had a range bounce within its previous weekly trading range. The bounce resulted from short covering ahead of the FOMC meeting this week

This week: There is lots happening: The FOMC meeting and policy announcement starts Wednesday, followed by the Fed Chair’s press conference Thursday. Speculation about an interest rate hike will dominate. Opinion on the Street is split. It is also quadruple witching week, with options and futures expiring. Expect some wild price swings attempting to run stops in both directions. 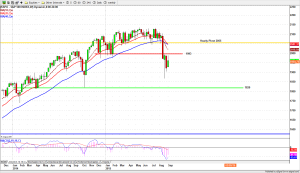 The SP500 has stayed under the eight-month broken support line since the big decline on 24 Aug. 2015. In the last two weeks the market has consolidated and tried to balance out oversupply and reduced demand – too many sellers and not enough buyers – resulting from that decline.

For the longer term, the 20-week moving average still hasn’t crossed below the 40-week m.a. line on the weekly chart. They are close to each other and flat, but haven’t given a long-term sell signal yet. This indicates there is still some hope the index can move back up to the momentum indicators (20/40ema weekly lines) it penetrated on the way down.

1972 is a decision line. The index needs to close above 1972 on a weekly basis in order to push the price up to re-test the 2023-50 zone. If the index closes below 1972 this week, it will increase the risk that the price will resume its downward trajectory soon.

1832-1820 is long-term support. This support zone should be tested one more time to prove the strength of the buyers. As long as this support remains intact as we move through October and mid-November, the return of favorable seasonality could encourage buyers to come back to the market. The index could hit the 2100 level again at the end of the year if the 1820-30 zone holds up firmly. 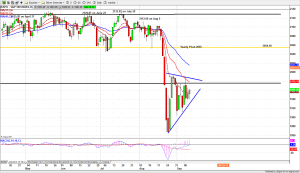 On Friday the S&P500 index closed above the 10-day moving average line for the third time since the big decline of Aug. 24. It is a sign that the cash index is less bearish; the Bulls were fighting back and trying to regain control for an upside move.

As long as SPX stays inside that triangle early in the week, the price will continue to chop around the 1965 line and try to shake out weak hands – that’s retail traders like us – on both sides. Later we should see a breakout from that triangle pattern pattern after the FOMC rate announcement. 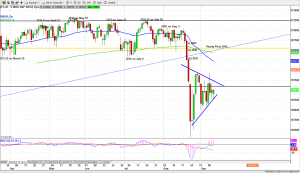 In the last two days trading, the ES managed to hold the price above the short-term uptrend line of a triangle pattern. ES has made lower highs and higher lows for 13 trading days since the low at 1831 made on Aug. 24. ES could remain inside this triangle today.

We expect ES to stay inside the triangle pattern. But there is another possibility, shown on the 15-minute chart below.

If the ES fails to move above the 1965.50 line this week, there is a potential butterfly pattern developing, which often precedes a decline. Even if the ES goes up to touch 1965, but doesn’t close above 1965.50, there is still a chance it will move back down again. Both the 1955 and 1965 lines can control potential downside moves. 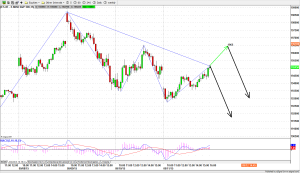 The ultra-short-term indicators have a little overbought condition. But market sentiment still has some residual bullish bias, prompted by hopes the Fed may delay an interest rate increase. However the majority are waiting for confirmation of the breakout direction. A break out in either direction is likely to carry the price along in that direction, at least for a short time.