Last week: Lots of volatility. The index started with a big decline and closed September with a 3% loss. Then it rallied up 1.79% in the first two trading day of October. Paradoxically, the rally resulted from unexpected bad data for employment and factory orders. The bad data convinced the investors the Fed may not be able to hike interest rates in October. Bad news is good news again.

This week: We could see a continuation rally. A big bullish reversal signal was given after the SPX successfully tested the August 24th low last week. The short-term rally could push the index towards its 50-day moving average (1987 level) or 200-day moving average line (2037 level) if it manages to hold above 1900 through this week. 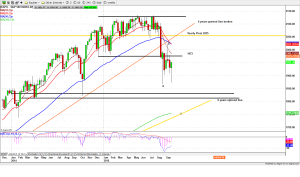 The long-term outlook didn’t change much last week. The SP500 index is still bullish in the long-term (six-year uptrend). So far only the intermediate-term remains in a downtrend correction channel. The short-term has a strong oversold bounce.

Even though the short term movement was strong on the upside last week, it hasn’t changed its A-B-C correction pattern yet. The B top is still a major resistance line. The index needs to go higher than the B top and close above it to confirm that correction pattern is breached. Until that occurs, the intermediate-term trend remains down. However the intermediate chart could form a sideways range from 2025 to 1850 to replace the A-B-C pattern.

Several Fed officials including the chair, Janet Yellen, have canceled speeches and statements recently. Is there something they don’t want to say? The current dump and pump has resulted from Fed actions, non-actions and statements, and they are starting to look clueless. But the things they say and fail to say will continue to roil the markets this week and beyond. 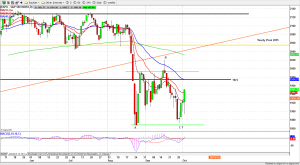 S&P500 index finished strongly last Friday by rallying into the close. The price not only closed above its daily momentum resistance line (20ema) it also successfully held above the test of the Aug. 24 low. Now the short-term is relatively bullish.

The third quarter earning season starts this week. We may see statements about “poor earnings” – often an excuse to report results that are “better than expected” — but good or bad they will move the market.

Anticipating good earning could drive the index up further … but so could bad results if they are seen as preventing the Fed from raising interest rates. The fear about Fed hiking rate in October was eased by last Friday’s employment report. And there is not much evidence the Fed wants to raise interest rates anyway

For the short term, the price action is bullish with high volume on rising prices. The sentiment turns bullish and strong bullish sentiment could help move the index up to test the 50-day moving average line. But sentiment can change quickly. A failure to move above the 1990 level could lead index to drop back near 1905 again. 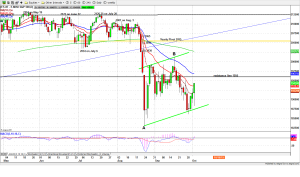 Last Friday was one of those high volatility days: the market plummeted on bad news (non-farm payroll data) then turned around to rally on… what? Hope for the upcoming earnings season?

In the regular trading session the ES dropped 43.75 in the morning, and rallied back 60.75 points in the afternoon. A big win for the algos.

The price action was very bullish on Friday. ES had a strong follow-through move on a second day rally. A bullish continuation move is likely to be seen again.

Download the full trading plan, with the buy/sell numbers here: 151005

Today 1944.25-46.50 zone will be the first key zone to watch. If it says below this zone, the ES could retrace back to retest last Friday afternoon’s breakout levels at 1919 and 1910.50 or lower around the 1900 line. However as long as ES holds above 1900 the outlook is bullish. The price should go back up again later.

Traders should focus on the long side if ES has a retracement in the early sessions, especially during overnight trading if price pulls into 1905-03 zone.