Last week: The October equity and index option expiration week sent the SP500 to a close above the 200-day moving average for the first time since the late August crash.

This week: the economic calendar is light this week. The market mostly will focus on company earning reports, which have been mixed so far. 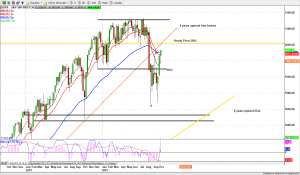 The long term outlook is unchanged, and the long-term uptrend remains bullish.

The intermediate-term uptrend is in its neutral level now, but we are approaching the point where the neutral intermediate outlook intersects with the short-term downtrend. What often happens is that bullish sentiment starts to rise, and then the next leg down starts. It has happened before, but it may not happen this time, for several reasons.

First there is the Fed, which has already disrupted the “natural” market movement. The Fed is propping the market up, intentionally or not, and regards the so-called “wealth effect” of high stock valuations as an important element in public confidence.

Second, we are entering the favorable season for US equities. The beginning of November to the end of April (with a few exceptions) is the best time to be long equities in most years. This is a period when negative news tends to be discounted and investors – especially the big boys – are inclined to buy the dips. It doesn’t work all the time, but it works often enough to skew markets to the upside.

At this time we need to pay attention to the 20- and 50-day moving average lines. If the price continues to trend up, the 20ema will cross up through the 50ema, which could generate a second intraday trend model BUY signal. This signal could help SPX move up to test the broken four-year uptrend line, suggesting a recovery from the August crash. 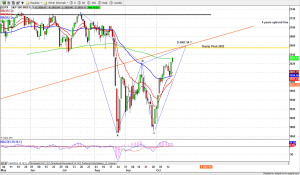 Last Friday the S&P500 index (SPX) broke the mid-September rally high at 2020.88 and closed above. It indicates that SPX has turned bullish, at least according to the timing indicators.

In our last market preview we mentioned the rectangle pattern that was forming on the SPX chart, and said  we expect the  SPX could be staying inside the second half range (2035-1860). So far the price hasn’t broken this range yet.

But if the index moves above 2035 this week, the upside momentum could pick up, and lead price to create the alternative pattern we are looking at, a butterfly pattern which in this phase is bullish.. The first major upside destination of a butterfly pattern would be 2065-70 zone. We may see some profit taking there.

The short-term indicators are overbought. But the market sentiment is bullish. The corporate earning reports could influence the US market price a little bit this week, but mostly the market will be anticipating yet another FOMC policy announcement, due out on Oct. 28