Last week: the market was held up by the Plunge Protection Team early in the week in response to the terror attack in France the previous weekend. Later the FOMC minutes sent a clear message to the world: the USD remains strong and the US market could be a safe place for investment. Normally hints of a rate increase depress the market, but the S&P 500 index went higher for Friday’s closing.

This week: It is a very short trading week, due to the Thanksgiving holiday. The market is closed on Thursday and only open a half day on Friday. The index could go higher in Monday and back down on Wednesday. IF there is a minor weakness move this week it will not change the short-term uptrend direction. We expect the buyers will continue to hold the index price up. 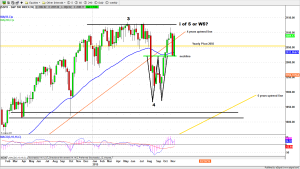 SP500 index (SPX) didn’t change much on the long-term and intermediate-term charts. The uptrend remains intact in both time frames.

Only the short-term is showing the effects of external uncertainty. If or when the short-term uptrend changes direction depends on how investors react if the Fed does raise interest rates on Dec. 17. There’s a lot of buying and selling to do before then.

Based on the weekly chart, the index had an engulfing pattern, which is bullish price behavior. The long-term resistance lines are above of current price and the neckline of the double bottom pattern is a support area. If the index can’t break above 2135 level, the price could go sideways to the end of this year. 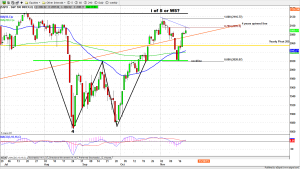 The S&P500 index moved a few points above September’s high in intraday trading, but still closed below that high on Friday. So far the 2095 resistance line still holds the index down.

But the four-year uptrend line below the current price will act as support if there is any pullback this week. Only if the index goes under this four-year trend line should we expect to see a retest of the yearly pivot level at 2055.

The yearly pivot is a very important level for Fund managers and we may see some volatility in that area if the market does retrace. Some funds are still under-performing for this year and we are approaching the time when year-end bonuses – typically based on performance relative to some benchmark – are calculated. We may see an attempt to goose the market into the year end.

So far the market is anticipating a Fed rate hike at the December 16-17 meeting, just in time for Christmas. But the impact on the market may be muted. Normally rising interest rates hurt stocks, but an end to the Fed’s peek-a-boo communications strategy may be seen as beneficial and move the market up.

In technical terms, the 50-day EMA line has crossed above the 200-day EMA – barely — which is usually a buying signal for the intermediate time-frame. But the simple moving averages still haven’t crossed, and there is no long-term buy signal yet.

Many important stocks moved above 200-day SMA line last week, and have intermediate-term overbought conditions. So a number of major companies are overbought, but are also widely seen as over-valued. Not good, and maybe the basis for a surprise move.

Last week the large-cap index bounced almost exactly from the 38% Fibonacci retracement and moved back to the previous resistance. That is textbook stuff, and we’d normally expect a move higher to follow. But before the index confirms a short-term breakout, we’re expecting either a sideways crawl or a small pullback, especially in a week with essentially only three days to trade.

Those three days may be hectic. A lot of traders will take off at Wednesday noon for the long, long holiday weekend. We may see a little mischief. 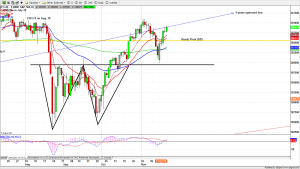 Friday the ES had a gap up at open and managed to hold above the gap for closing by the smallest of margins. It closed 1.75 points above the regular session open.

Sentiment remained bullish even though the price movement was slow on Friday. The total volume was lower than average, The old “thin to win” adage worked for November option expiration day and moved the price up.

Today the four-year uptrend will be the key line to watch. A move above 2095.50 is likely to push ES higher to challenge the November monthly high near 2110.25.

A failure to move above 2095.50 could lead the ES to repeat last Friday’s range or move lower to fill the remaining gap at 2079.25. However we will continue to see traders “buy the dip” this week