Last week: SP500 index had a continuation high move, and made an intraday high at 2094.32, which effectively recoups all of the loss suffered in August. The index gained 159.33 points in October, up 8.3 % month-over-month, the best monthly gain for this year.

This week: Ultra-short-term pullback is likely this week even though the time still favors an upside move. The Index could test the downside at about 2000 level. Be prepared for a pullback, but get ready to see the buyers showing up at the 2000-1980 level – if we get there. 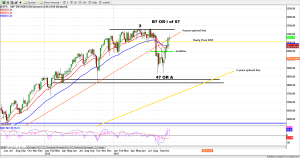 In last week’s market preview we discussed why 2093 — the December 2014 high — was a significant resistance area for the SP500 index.

This week the price managed to get a few ticks above 2093, but was rejected by the resistance area and promptly dumped 20 points into the monthly close.

At the close there were 25,000 ES contracts on sale, which suggests a lot of big money moved out of the markets for month’s end.

The answer depends to a large extent on how much – if any – the index falls this week and next. The price needs to at least go below the 1975 level to sustain the possibility of a retracement. If it doesn’t, we can expect the price to keep following the rising line of the up-trend into the end of the year..

The ema’s will act as a magnet and the price is likely to drop back near them. In addition, all indicators are approaching overbought territory. Some pullback into 2015-2005 zone should be expected.

That would give the aggressive swing shorts who were trapped around 2050-45 two weeks ago a chance to escape. When they start covering any pull-back will start to slow down, and perhaps reverse.

The US stock market is moving into the favorable season for stocks. The index has also moved back to a level where the Fed feels comfortable considering a rate increase. Market sentiment has returned to bullish.

But we expect more Fed manipulation and contradictory jawboning will disrupt natural market price moves until the end of December. Predictions — including ours — need to be treated with caution. 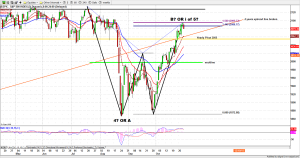 S&P500 index made a doji pattern on Thursday and had a pullback move on Friday with a 0.5% loss on the day.

2105-2096 will be a big resistance zone and 2000-1980 (neckline zone of the double bottom pattern) will be a big support. The index may drop to test the neckline zone in coming weeks, but it is unlikely to see the August low (1867) for the rest of the year. Every big drop could be bought by seasonal buyers.

This week begins with important news from China before the Sunday night open, and several Fed speakers during the week. In addition to company earnings reports, there are plenty of US economic data to be released, especially non-farm payroll on Friday. We could see some surprises.