Last week: Concerns about the Fed hiking rates in Dec drove SPX down on the first day of week. Even though there was a small bounce the following day, the bounce was not strong enough to prevent the price from falling further. Speeches from various Fed members added more fear into the market and the index not only broke its major support line, it also moved back into negative territory for the year.

This week: it is November Option Expiration week. The original expectation was last Friday’s low could be the low for this week. Now the additional concern arising from France makes it more difficult to predict what will happen this week. If things get worst, the market could continue declining. But we may also see the Fed’s Plunge Protection Team show up to slow down the decline or push the price back up. 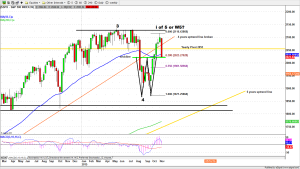 The SP500 index pulled back into the neckline of the bullish double bottom pattern. In technical analysis, this is considered normal price behavior. The pull-back didn’t do any damage to the long-term uptrend, and so far should be treated as a healthy correction move.

In previous plans we mentioned the possibility of a series of moves in the last half of the year similar to the year 2011. So far the index has followed that pattern. If we continue, the pull-back from the high should be roughly 134 points. So far, from the high at 2116.48 made on Nov. 3 until last Friday, the retracement has only covered about two-thirds of the expected distance. The final target should be around the 1982-75 zone  … if the pattern holds.

On Friday the SPX closed at the 38.2% Fibonacci support level. Below it, there is the 55% retracement at 1982, which overlaps our maximum target for the pullback. If the price declines below that level, 1950 will become a key line to watch. A move below it could trigger intermediate-term selling and lead the price back to the August low.

A month ago we posted long-term SP500 price projections. It is updated below.

The Fed didn’t take the opportunity to raise rates at its September meeting, but it was still successful (if that was their aim) in attracting overseas money into US markets. Anticipating the Fed’s moves is a guessing game, but for the rest of this year we don’t think Fed will rise the rate if the SPX fails to hold above the 2020 level. It is quite clear that not only traders know their lines, so does the Fed.

There are lots of external uncertainties – apart from the Fed – that largely influence the stock market. Slow economic growth, and now war and terrorists, make it difficult to maintain a positive outlook for the stock market at this time. 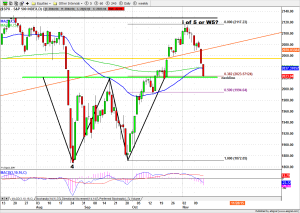 S&P500 index closed just above the September’s high area (2020), which is also the neckline (and broken resistance) of the double bottom. So far the index has 38% retracement from this month’s high to September’s low. It may retrace further to test 2000-1995 if 2020 fails to hold up on Monday.

In the short-term, the index not only broke down through the four-year uptrend line for a second time, it also broke down (and closed below) the 200/50EMA lines.

The loss of major support lines gives a bearish short-term outlook for the coming weeks. Any bounce will give trapped buyers a chance to exit this market. Unless the index regains control of the 2100 level, the price could remain below it for rest of the year.

Now the 50/200EMA lines (2038-37) become a key zone for this week. A move above it could lead the index to retest 2050 level. Short-term has an oversold condition. An oversold bounce should be seen the in ultra-short time frame.

In addition to the technical outlook, external events largely influence price movements. On Friday the market was already down before the news of the terrorist attacks in France but there will certainly be market impacts on Monday. It is difficult to say what they may be. Some European market may be closed Monday. If there is powerful action from the US president, we may even see a patriotic rally. 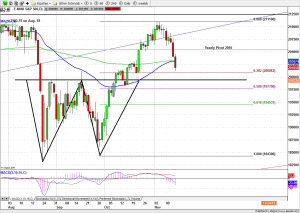 Last Friday ES had a continuation declining day. It not only had a strong gap down at open, also it broke decisively through the 200/50EMA support line at 2030.75 and closed near the low of the day. The price action was strong on the downside, and gave a bearish outlook for today.

But the short-term has an oversold condition. It tried to bounce in the middle of Friday trading but failed, and later news of the terrorist attack in France ended any hope of a bounce. Today we may see a further decline depending on the response to the situation in France. In the alternative we should see some oversold bounce.