Last week: SP500 index had the first week down after rallying for 5 straight weeks. But thanks to a last-minute recovery it managed to hold above the 200-day moving average line for the close in a holiday-shortened week.

This week: This is the end of the first quarter, and traders will face a re-balancing move, either sideways between the 2065 to 2000 range move or a further pullback down near the 1980-75 zone. 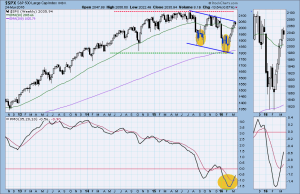 The S&P500 index holds above the 50-week moving average lines. It is not surprising to see it spend the past week consolidating since it has rallied since mid-February. Very little has changed on the weekly chart, even though the index had its first down week in the past six.

There is a downtrend channel in the weekly price chart. The index came close to the declining trend resistance line. Since index moved above 50-week moving average line, it has begun to encounter resistance. Now it is a critical time. It has to make a decision if it will rally above resistance line or end this rally in a reversal.

Here are two indicators to watch for an early hint about the outcome. 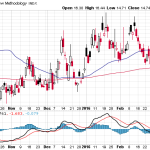 VIX (sometimes called the “fear” indicator) is viewed as an inverse indicator. The lower it goes the more investors are bullish, and the closer the stock market is to a reversal. When it spiked last September the VIX climbed above 50, and that marked a bottom for the stock market decline.

This year it barely reached 30 when the January declines were at full force, and it has been declining (showing an absence of “fear”) since the middle of February. We have not seen a spike to indicate a bottom is forming. The VIX closed last week at 14.74 and the prior week at 14.02. The VIX says there is no fear… and without fear you are not likely to have a bottom. 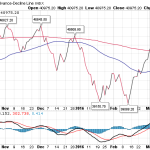 The AD line tends to drop after it touches new highs, as it has this week. That isn’t necessarily a sign of a market reversal, but it is an indication that the struggle between the Bulls and the Bears has not been resolved. Look at the sharp drops after reaching new highs. Even though it didn’t tell us “a bearish reversal” in price is imminent, it adds to evidence of the battle between Bulls and Bears that is in progress. Until it is resolved, the direction of the next move is in doubt. 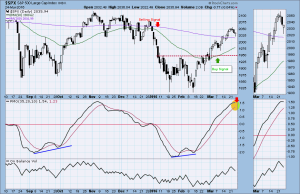 After the SP500 index moved above the 200-day moving average line, it started to show difficulties in carrying to new highs.

In the course of the holiday-shortened week it returned to the area of the 200-day moving average, but managed to close above that line.

It is a consolidating behavior and it is the PMO indicator that stops its advance. More consolidation or a pullback should be expected.

This is the final week of March, and the end of the first quarter of 2016. It is a re-balance week for the first quarter. If the index moves below 2020, we should expect to see a re-test of the 2000 area, or perhaps a bit lower near the 1980 area. Conversely, if the index holds above 2020, we may see a move back up to last week’s high.

Sorry. This section contains the detailed buy/sell levels for this week. It is reserved for paid subscribers.

You can get instant access for as little as $9 per month by clicking the “Join” link in the upper menu bar.