Last week: After a brief pullback early in the week, the SP500 index resumed its rally on Friday. It not only closed above its medium-term key resistance level, it also erased most of the loss for the year. At the close it was only down 1.3% for 2016, despite the near-crash in January.

This week: This week is March option expiration, which tends to be bullish. In addition, we have quadruple witching, which occurs when the quarterly futures contracts expire on the same day as option expiration (Friday). It tends to be even more bullish. It should be a busy week: first the Fed FOMC announcement on Wednesday, and then two index options expire March 16 and 17, and ES index future and option expire March 18. We are likely to see the price have a wild movement. 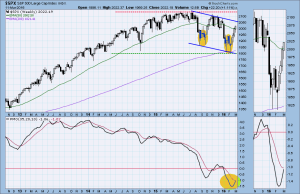 The Index closed above the 50-week moving average line last Friday and gave a bullish outlook. The PMO indicator (weekly) fast line is near the slow line and it seems it is getting ready to cross soon.

Based on the weekly chart, the intermediate-term is bullish, and pattern also looks bullish. Now we have to wait for final confirmation that the Bull market will resume… or not.

1. The Fed FOMC announcement on Wednesday. The Fed fund rate futures suggest a less than 10% chance of a March hike. However the have recently been strong employment data released and the equity market is rallying. Commentators are divided: some say the Fed won’t raise rates immediately. Some say they will. If the Fed does take any action on rates the market will thrash around wildly.

2. Chinese government monetary and trade decisions. Many of the recent actions are bringing hardship to the Chinese people, and unrest. We the government to act cautiously and the influence on stock price – especially in US and Canadian markets – will be reduced. The tougher the policies China enforces, the greater the outflow of capital will be, and the premier destination for fleeing capital will be US financial markets. This could help hold US markets up and deflect any substantial decline, at least temporarily. 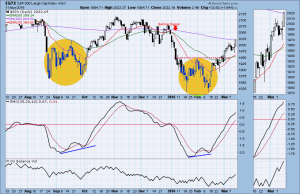 The S&P500 closed slightly above 200-day simple moving average line on Friday. It had a strong weekly gain in breadth and sentiment as well as price last week.

Last Thursday’s low could be the level acting as support for this week. 1967-66 will be first major short-term support. As long as the index stays above this zone, the short-term uptrend remains intact.

This week is a quadruple witch week, which tends to be bullish. But the FOMC report on Wednesday may bring some selling back into the market if the Fed provides unexpected hints suggesting a rate hike. 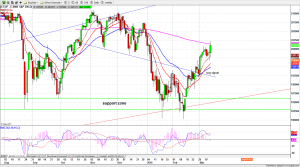 ES gapped up strong at the open Friday and managed to hold above the gap for closing. The price action was bullish, a result of the rollover into the June contracts. But total volume remained below the average.

Today the 200-day moving average line is lying at 2014.25. That is the first major resistance, just slightly above the Friday close for the new contract.

The first major resistance line will attract many traders’ attention. A move past it, continuing above 2023.50, will convince buyers that later the ES intends to go higher up to 2050-75 zone.

A failure to break above it will lead a minor pullback to retest last Friday’s low or lower to fill 1989.75 gap. But “buy on dip” on support will continue to be seen.